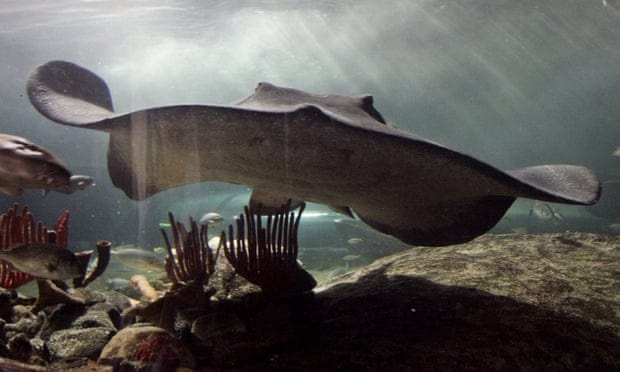 A 42-year-old man has died of a heart attack after apparently being stung by a stingray while swimming off the Tasmania coast, police said. Attempts to resuscitate the man, who suffered a cardiac arrest on Saturday afternoon in the waters at Lauderdale beach, east of Hobart, were unsuccessful, police said.

“He was removed from the water by friends prior to the arrival of emergency services,” the Tasmanian police said in a statement. “It was reported he was unaccompanied in the water at the time of sustaining a puncture wound to his lower abdomen.”

The man was swimming close to shore when the attack happened. The police statement did not name the man.

The beach was open on Sunday. On Saturday the ABC reported the mayor of Clarence, Doug Chipman, saying the council was yet to decide whether it would close the beach after the incident.

“We have to find out if this is a one-off tragic accident or whether there’s a wider threat to the community,” Chipman said.

Stingrays are not considered aggressive and fatal stingray attacks on humans are extremely rare. Its venom causes pain and can alter heart rate and breathing.

In 2006, Australian conservationist and “Crocodile Hunter” Steve Irwin died after a stingray’s serrated barb pierced his heart while filming off the Great Barrier Reef.

This article was first published by The Guardian on 18 Nov 2018.

This swimmer was very unlucky. Too bad death was the outcome. My condolences.

Thank you for posting the beautiful photo, beautiful animal.