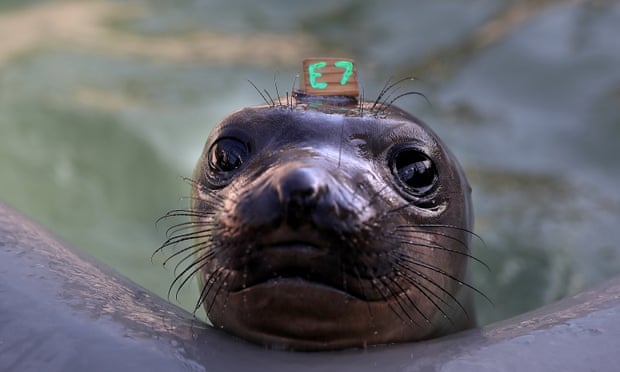 A man has been sentenced to three months in federal prison for shooting a protected northern elephant seal to death on the central California coast.

Armed with a .45-caliber handgun and a flashlight, on the night of 2 September 2019 Jordan Gerbich, 30, opened fire on an elephant seal at a popular viewing area where the giant aquatic mammals haul out along the shore near the Monterey Bay national marine sanctuary. The elephant seal was discovered the following morning with a bullet wound to the head and its tail fins cut off, according to the National Oceanic and Atmospheric Administration.

Noaa’s office of law enforcement and the California department of fish and wildlife opened an investigation, and Gerbich, who now lives in Utah, pleaded guilty last year to a count of illegally taking a marine mammal, a federal misdemeanor.

Gerbich told prosecutors that he shot the seal after being challenged to do so by an intoxicated friend, “as a kind of grotesque test”, court documents show. He also told investigators he had a history of substance abuse and had suffered physical abuse as a child, which is why he struggled with the need to seek approval from others. He has expressed regret for the incident, saying that he knew the act was wrong, court documents show.

Gerbich’s attorney said his client viewed the act as “so unusual and troubling”, but prosecutors emphasized that it was premeditated and “did not happen by accident or on a whim”. Gerbich and the friend who told him to kill the seal drove out to the area where the mammals rest and give birth, to shoot the animal.

On Monday, Gerbich was sentenced by the US district judge Dale S Fisher for the crime. After his prison term, Gerbich will spend three months in home detention, will have to perform 120 hours of community service and will have to pay a $1,000 fine, the US attorney’s office said.

The second largest seal in the world, they struggle to move quickly on land, where they haul out on beach areas known as rookeries. Populations have rebounded in recent years, after reaching near extinction in the early 1900s when only a few hundred remained.

Now under protection, they are still under threat from being hit by ships and becoming entwined in fishing nets during their long migrations, which can extend up to 13,000 miles roundtrip.

This article was first published by The Guardian on 15 April 2021. Lead Image: An elephant seal pup in a pool at the Marine Mammal Center on 20 April 2017 in Sausalito, California. Photograph: Justin Sullivan/Getty Images.