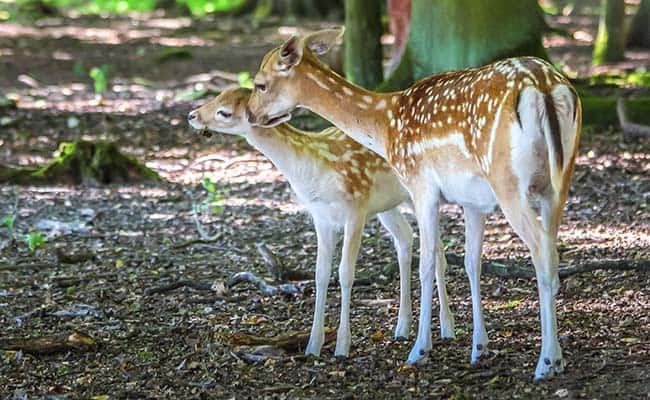 Trophy hunters David Berry; his sons, David Berry Jr. and Kyle Berry; and about a dozen others killed hundreds of deer in Missouri over a period of three years. After they shot the deer, they cut off and took the heads, leaving the bodies behind to rot.

“While there are some cases where poachers go after the antlers for profit, with this bunch it was more about the thrill of the kill itself,” Randy Doman, protection division chief of the Missouri Department of Conservation (MDC), told the Springfield News-Leader.

The trophy hunters were arrested in August 2016, after the conclusion of one of the state’s largest investigations ever into the illegal poaching of deer. More than 300 charges were filed against them in state, federal and international jurisdictions.

Among the charges were using illegal weapons—like bright lights at night to temporarily blind the deer so they freeze in place, making for an easy kill—and cruising along in their vehicles and shooting deer from the roadside, which violates Missouri hunting laws.

This fall, the two men were arrested again for violating their probation. Berry Sr. posted bond and is waiting for a revocation of his probation, while Berry Jr. pleaded guilty to taking wildlife illegally. On Dec. 6, Lawrence County Judge Robert George sentenced him to one year in the county jail. A week later, Berry Jr. also received a 120-day sentence from Barton County Circuit Court for a felony firearms probation violation.

The convictions were made thanks to tips provided to Operation Game Thief, a hotline sponsored by the MDC and the Conservation Federation of Missouri. The defendants had bragged to friends that they killed 1,200 deer, according to Lawrence County Prosecutor Don Trotter.

As Berry Jr. serves his (much too short) jail time, the judge added an unusual sentence: the deer killer must watch the movie Bambi once every month.

Spoiler alert! In this 1942 Disney classic that horrified a lot of us as kids, when the young fawn’s mother hears gunfire, she urges Bambi to run away as fast as he can from the hunter and not to look behind him. “Keep running!” are her final words.

“The judge was kind of trying to get through to this guy, some kind of emotional response over the gravity of what he has done,” Trotter told the New York Times. “Something more than just sitting there for 12 months in a jail.”

Judge George told the Times he felt that Disney movies “always placed the viewer in a unique opportunity to learn life lessons about relationships with others and the effects of decisions.”

While this sentence would be rather appalling to someone who cares about animals, will it really impact someone like Berry Jr.?

I’m thinking that a much, much longer sentence than 12 measly months—especially considering that Berry Jr.helped perpetrate one of the worst poaching cases in state history—would be more appropriate and could serve as a deterrent to other poachers. When he’s released from jail, Berry Jr. should be required to volunteer his time caring for real, live deer in a sanctuary or wildlife rehabilitation center.

What do you think? Is sentencing a trophy hunter to watch Bambi over and over again a good idea? Sound off in the comments below.

The sentencing for these three sub-humans is an insult to animal lovers and everyone that respects the lives of all animals every where. I’m wondering if the judge is a hunter or just a Disney admirer .In any case the punishment does not fit the crime and I’m disgusted that animal abusers are consistently treated with “kid gloves”. I’m a licensed wildlife rehabilitator in N.Y. and care deeply about all animals; so I find the actions by these murderers especially disturbing, It has been proven that serial killers begin their abuse of animals at an early age and eventually become… Read more »

So he gets three squares a day, a roof over his head, a gym (most likely) and a movie about the thing he loves best? Are they serving him popcorn too? How about a minimum of five years in jail; a mandatory, monthly lifetime financial contribution to a local animal rescue,;lifetime ban from owning any animal and from hunting, trapping, or killing any wildlife. Five additional years of volunteer work at a wildlife shelter when released; And he needs to be required to get himself mandatory psych help.

Maybe a sentence like that would impact someone who has empathy and loves animals? BUT obviously, anyone who was that kind of person wouldnt have slaughtered all those animals! Frankly, I doubt that this monster (or his son) will be changed by watching a movie now & then. They already poached out of season – taking away their hunting licences really isnt going to accomplish much – if they are allowed freedom!

Why was the petition about the poachers of rhinos closed?

This psychopath is sticking two fingers up at the law – and quite rightly too – the law is a complete ass!! This is not Clockwork Orange. This lunatic who is obviously in love with killing living creatures could easily take the next step and start killing children – after all, they are as innocent and vulnerable as the hundreds of deer he killed!! He should be euthanised and quickly before he wastes more tax-payers money!!

No, he’s not going to start killing children. That’s not how hunters are wired, and that’s what he is (albeit an extreme and illegal one).

Isn’t it bad enough that he’s mercilessly killing helpless animals?We don’t have to escalate it to humans to make it reproachable – it’s bad enough as it is.

Needs a year in jail for every deer he murdered

I am so glad he has to watch Bambi every day , BUT, will he stop his mass kill ing of the deer ? HUH hope so.