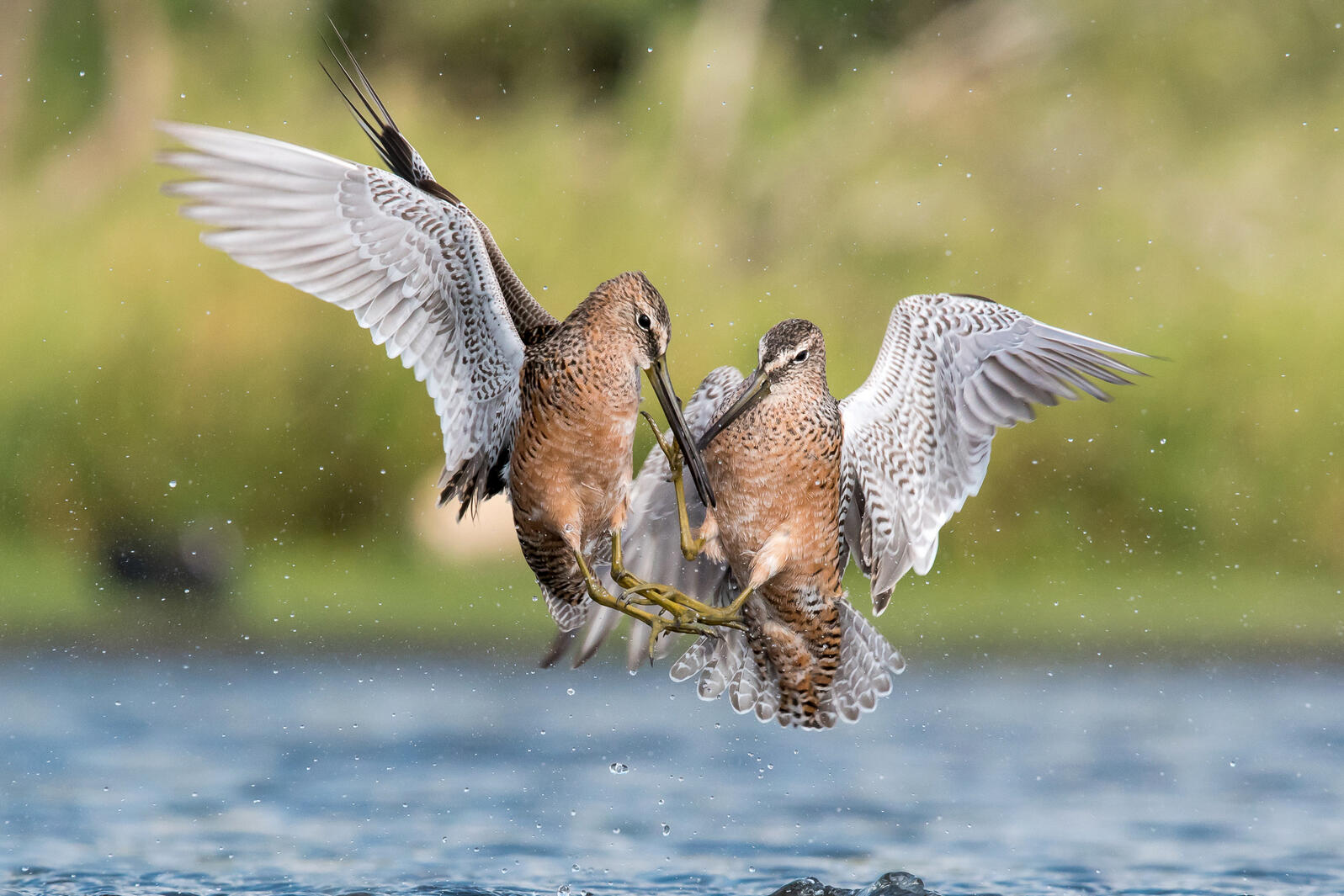 Long-billed Dowitchers—shorebirds about the size of robins—annually migrate from breeding areas in Alaska and eastern Siberia to wintering areas in the southern United States, Mexico, and the northern part of Latin America. Along the way, surveys indicate that up to 150,000 Long-billed Dowitchers stop annually in the Lahontan Valley Wetlands, some 70 miles east of Reno, Nevada. In fact, comprehensive surveys across the entire Intermountain West show that Lahontan Valley’s Dowitcher numbers are among the highest in the region.

The large numbers of Long-billed Dowitchers and other shorebirds led to the designation of the Lahontan Valley Wetlands as a Western Hemisphere Shorebird Reserve Network (WHSRN) site in 1988. WHSRN is a hemispheric network of sites that, through effective partner-based conservation, strives to secure healthy shorebird populations and habitats now and into the future. Audubon’s Saline Lakes program also recognizes the Lahontan Valley as critical to a network of lakes and associated wetlands that provide habitats for shorebirds, waterfowl, and other waterbirds in the otherwise dry Great Basin landscape. The Lahontan Valley Wetlands site is comprised of Stillwater National Wildlife Refuge, Carson Lake and Pasture, and tribal wetlands with management partners including the Nevada Department of Wildlife (NDOW), U.S. Fish and Wildlife Service (USFWS), U.S. Bureau of Reclamation, Truckee-Carson Irrigation District, and the Fallon Paiute-Shoshone Tribe. Lahontan Audubon Society also has been working to to protect birds in this area since the 1960s.

As the West continues to dry, partners and land managers in this valley work to balance the many needs and uses for water including human municipal and agricultural uses as well as the need to protect shorebird and other animal habitats. This creates the need for vigilant water management as it relates to the timing, quality, and quantity of water available to both people and birds. Changing climate conditions contribute to water challenges. In 2019, Haig and coauthors documented drier regional climate conditions with earlier streamflow and reduced water availability from 1980 – 2008. A 1990 federal law authorized the Secretary of the Interior to purchase water rights to maintain Lahontan Valley wetlands. While USFWS has actively acquired rights for Stillwater National Wildlife Refuge and the Lahontan Valley Wetlands, additional work is needed to obtain the full amount of water required to manage wetlands effectively into the future.

NDOW staff and other professional biologists and volunteers have surveyed shorebirds at the Lahontan Valley Wetlands WHSRN site since 1986. The result is likely one of longest running datasets available for a wetland site across the western United States. Recently, Audubon’s Saline Lakes Program, Manomet, and the USFWS collaborated with NDOW to analyze these data sets to inform the eventual development of a Carson Lake and Pasture management plan.

Analyses over the 34-year period from 1986 through 2019 reveal that 28 shorebird species utilize the Lahontan Valley, and of these, 19 species were present in at least half of the years surveyed. Long-billed Dowitchers and American Avocets were the most numerous shorebirds encountered. Summed seasonal shorebird counts exceeded 20,000 in 30 years and 100,000 in 8 years. Overall, the analyses reaffirmed the international importance of the Lahontan Valley Wetlands WHSRN site.

To assist management planning for Carson Lake and Pasture and Stillwater National Wildlife Refuge, the assessment also identified 11 potential focal shorebird species, all of which depend heavily on the Intermountain West to support their populations. Some focal species occur regularly and are relatively abundant at the Lahontan Valley Wetlands, and others occur regularly at the site and are species of concern in the U.S. Shorebird Conservation Plan. The focal species list includes Black-necked Stilt, American Avocet, Snowy Plover, Long-billed Curlew, Marbled Godwit, Least Sandpiper, Western Sandpiper, Long-billed Dowitcher, Willet, Wilson’s Phalarope, and Red-necked Phalarope.

The science-based identification of focal shorebird species provides a foundation informing future management planning for Carson Lake and Pasture and Stillwater National Wildlife Refuge. To build on this foundation, next steps may include describing focal species’ habitat requirements, setting habitat and shorebird use goals, identifying shorebird and habitat management opportunities, monitoring to assess progress towards goals, and coordinated management and monitoring of the Lahontan Valley Wetlands site.

Audubon Society and Manomet recognize the Lahontan Valley Wetlands as a crucial stepping-stone along the migratory journeys of shorebirds. Both organizations are committed to continued close collaborations with valued, local partners, including NDOW and the USFWS. Through collaborations, these partners will strive to ensure that, as Long-billed Dowitchers and other shorebirds wing their way across the continent, the Lahontan Valley continues to provide them with a place to rest, refuel, and thrive.