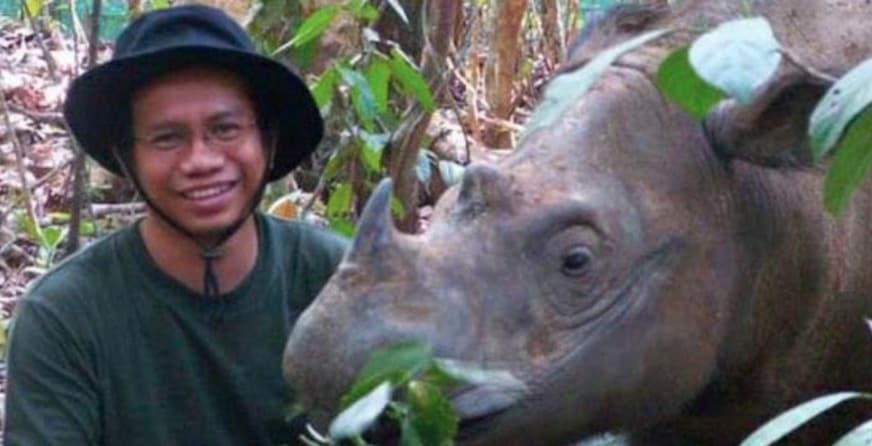 Camera traps monitor a handful of the world’s remaining Sumatran rhinos in Sumatra’s Way Kambas National Park. Wildlife managers tend to a female rhino at a breeding center in Kalimantan, the Indonesian portion of the island of Borneo, hoping she can help ensure a future for this critically endangered species.

Like many efforts to protect Sumatran rhinos (Dicerorhinus sumatrensis) in Indonesia, these programs were made possible by Marcellus Adi Riyanto, an Indonesian conservationist and veterinarian who died April 27 in Kalimantan.

“Marcel’s contribution to Sumatran rhino research and conservation is enormous,” says Den Danang Wibowo, a staffer at The Alliance of Forest Integrated Conservation (ALeRT), the community-oriented conservation coalition founded by Marcellus. “Information about the Sumatran rhino that has flowed to us to date is one of his masterpieces.”

Marcellus was at the vanguard of veterinary and reproductive research on this species in captivity in Indonesia. As a veterinary student at the Bogor Institute of Agriculture, Marcellus was riveted by rhinos while researching them for his thesis at Jakarta’s Ragunan Zoo. He graduated in 1983 and fulfilled his calling to work with rhinos by joining Yayasan Mitra Rhino, the country’s first organization dedicated to these animals.

Marcellus arrived as a vet at the Way Kambas Sumatran Rhino Sanctuary (SRS) in the late ’90s, says the International Rhino Foundation’s Indonesia coordinator, Inov Sectionov, who was Marcellus’s colleague at the sanctuary for a decade.

While serving as a veterinarian, Marcellus supported community-based wildlife conservation initiatives. In 2000, Marcellus became the facility’s first manager. He conducted surveys of the park’s rhinos, and presented an array of conservation talks.

He catalyzed Indonesian knowledge on the species, not only through his own studies but also through empowering visiting students to pursue theirs, on diet, behavior and additional topics, Sectionov says.

“He was a workaholic, and he loved rhinos very much, which influenced me,” Sectionov said, recalling Marcellus’s huge collection of rhino T-shirts, toys and trinkets. “At the time, not many vets wanted to spend life in the forest for wildlife.

Most worked with domestic animals. Marcel tried to change the paradigm with rhino conservation. Nowadays, a lot of vets work with wildlife in Indonesia. Marcel gave a good example for the young generation of vets.”

In 2009, Marcellus left his position at the SRS and went on to establish ALeRT. As its president and program manager of a debt-for-nature grant for Way Kambas, he oversaw forest restoration and rhino monitoring in the park.

“Marcel was patient, helpful, open and provided lots of input for his team,” Wibowo says, adding that his boss taught him the importance of optimism and serving others. “He was a father figure for us.”

Given his leadership at the SRS, the Ministry of Environment and Forestry and WWF Indonesia asked Marcellus to plan another sanctuary in Kalimantan following the 2016 rediscovery of Sumatran rhinos there. He directed disease surveillance and more for rhinos in West Kutai district, in the province of East Kalimantan. There, he collaborated with the East Kalimantan Natural Resources Conservation Agency, WWF, schools and other entities, until the completion of the 500-hectare (1,235-acre) sanctuary, where the government intends to breed captive wild rhinos. ALeRT took over its management from WWF last year.

“I see him as incredibly determined,” said Claire Oelrichs, founder and president of the nonprofit Save Indonesian Endangered Species Fund, which partnered with Marcellus for years on various projects in Way Kambas. “He built up ALeRT from a local group that got together in a restaurant to something that Indonesia asked to run that project of capturing rhinos.”

In recent months, Marcellus was aiding Sumatran Rhino Rescue — the coordinated global effort to save the species from extinction — by planning a new SRS in East Aceh, at the northern tip of Sumatra, and an artificial intelligence-based facial recognition app to better count, track, determine sex and assess reproduction in rhinos. These undertakings, which include gathering photos of the animals to train the software, continue today “to honor his struggle,” Wibowo said.

Marcellus became ill and died five days after his 55th birthday. The cause of death is unclear; he tested negative for COVID-19, said his friend Dicky Tri Sutanto, a Way Kambas staff member since 2005. Dicky said that despite Marcellus’s significant achievements, he always remained down-to-earth. “Until the last day … he was the same person,” Dicky said.

Oelrichs remembers “his dedication to Sumatran rhinos over a lifetime. He was lowkey, yet he worked very much in the international world. He was a cheery, funny, lovely person, just so likeable and more creative than most scientists.”

But what made him an outstanding conservationist, his colleagues say, was his extreme focus.

“He spent more time with rhinos than his wife, I bet,” Sectionov said. “Till he passed away, he consistently worked for the Sumatran rhino.”

This article by Julia John was first published on Mongabay.com on 19 June 2020. Lead Image: Marcellus Adi Riyanto feeds a rhino at the Sumatran Rhino Sanctuary in Way Kambas National Park, courtesy of ALeRT.