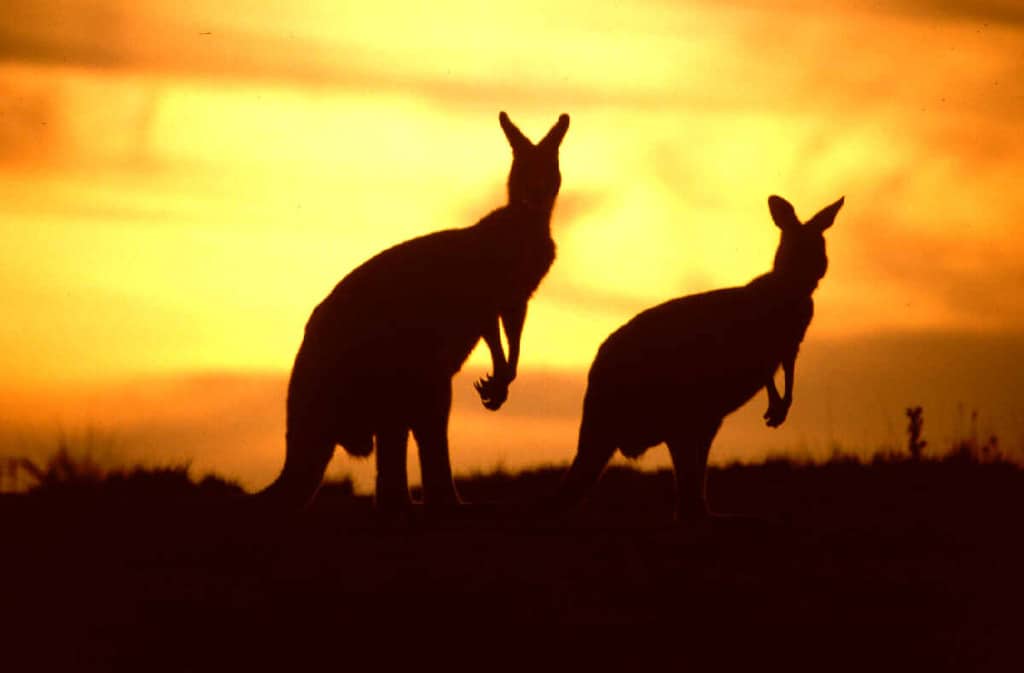 Each night in remote areas of the Australian outback thousands of kangaroos graze peacefully, stand up on hearing an approaching vehicle, stare into a blinding spotlight, and are shot for their meat and skins.

The commercial kangaroo kill ‘quota’ for 2009 (the number permitted to be killed) was just under 4 million kangaroos.

In addition many kangaroos and wallabies are killed under State non-commercial ‘permit’ systems. Due to the remote locations where the commercial kangaroo shoot takes place there is no effective monitoring of animal welfare. No statistics are available for the animals that are wounded and escape only to endure a long painful death.

Even conservative estimates suggest that at least 4% of adult kangaroos commercially ‘processed’ each year, or around 100,000 carcasses, show evidence that they were not humanely shot in the head as is required by the kangaroo industry Code of Practice (ref RSPCA Report 2002).

The fate of orphaned young, too small to be of any commercial value to hunters, is equally grim. ‘In pouch’ joeys of shot mothers are either decapitated (if very small) or killed with a blow to the head. Dependant ‘at foot’ joeys often escape, and suddenly face a life alone, often falling victim to predators, exposure or starvation. The mother and joey bond is immensely strong. Red kangaroos are not weaned until a year after birth and Eastern and Western Grey Kangaroos are not weaned until they are nearly 18 months old. It is estimated that 300,000 ‘at foot’ joeys die each year.

Don’t be fooled by protests that kangaroos are shot because they compete with grazing animals — this mass slaughter is purely and simply a commercial kill of Australian wildlife. Some skins and meat products are used domestically (60 to 70 % of kangaroo meat goes into the Australian pet food market), and the rest is exported to 55 countries as leather or meat for human consumption. Kangaroo leather is widely used in the manufacture of sporting shoes and gloves as well as in dress shoes and accessory manufacture.

Animals Australia and all other Australian animal protection groups strongly oppose, on welfare grounds, this mass slaughter of Australian wildlife. Aside from the obvious welfare problems, this annual slaughter is also putting the future of this unique species at risk. A two year investigation of the industry presented evidence that, coupled with the drought, the annual hunt is seriously affecting the future viability of the kangaroo populations targeted by shooters.

In shooting areas, since the commencement of the drought kangaroo numbers have fallen some 59% – from over 57 million (2001) to an estimated 23.6 million in 2006 (based on aerial survey of the killing zones).

A recent two-year investigation – conducted by the Wildlife Protection Association of Australia (WPAA) and Animal Liberation NSW and based on information provided by a kangaroo industry ‘whistleblower’ – found evidence of unsustainable and damning practices in the kangaroo industry.

Some 24 chillers (holding facilities for carcasses) around NSW and Southern QLD were inspected and samples from carcasses taken for testing. This investigation revealed that:

Animal Liberation NSW representatives have traveled around Europe and Russia to provide factual reports and hold press conferences alerting import country authorities and consumers of kangaroo meat to the plight of these animals in Australia and to the innate cruelty in the industry.

New report exposes the grubby reality of the kangaroo industry

A new report ‘A Shot in the Dark — a report on kangaroo harvesting’, commissioned by Animal Liberation (NSW) was released in May 2009 outlines problems of hygiene in the kangaroo meat industry, sustainability of kangaroo populations and animal welfare. The report estimates some ‘440,000 dependent young kangaroos are either clubbed to death or left to starve after their mothers are killed’. See the full report (written by wildlife ecologist Dr Dror Ben-Ami, which also includes material on contamination of kangaroo meat and sustainability issues).

Once again we have a cruel animal industry which continues only because it can operate without public scrutiny. Tonight, when you are sleeping peacefully, in the Australian outback the peaceful existence of thousands of gentle animals who have harmed no-one will end violently — for the sake of the mighty dollar.

In Canberra, in May 2013, the ACT Administrative Appeals Tribunal (AAT) ruled that the killing of thousands of kangaroos on Australian Government Defence Department land be suspended pending a hearing of the full Tribunal. Animal Liberation (NSW), through pro-bono lawyer Malcolm Caulfield (of the Animal Welfare Community Legal Centre), was successful in arguing that a ‘cull’ of kangaroos at a Defence Department ‘Majura Training Area’ should be stopped as the kangaroos were not posing an immediate threat to the ecosystem of the area.

Sadly, following a hearing in June, the ACT Civil and Administrative Tribunal determined to approve the cull, but reduced the permissable kill numbers by more than 200 animals. This still allows for shooters to kill 1244 kangaroos by the end of the July, with 740 of these to be killed on the Goorooyarroo Nature Reserve.

Unfortunately no sooner had the AAT ruling for a suspension been announced, than the Chief Minister of the Australian Capital Territory and the Defence Department announced they would change the local law — so that the Defence Department’s decisions regarding kangaroo management would no longer be subject to the AAT process!

For more information on this investigation and the plight of kangaroos, visit the kangaroo protection coallition

This article was written and published by Animals Australia the Voice for Animals.

There are not thousands of Kangaroos … there are millions. They outnumber every other animal in Australia. Kangaroos have 2 uterus and 3 vaginas. There is a joey in production every minute of the day of every year. If the season is bad kangaroos are able to 'hold back' the next egg being developed for when times are better. Australia has had a very strict quota system for about 40 years. We have some of the strictest gun laws of any country in the western world. All this absurdity about a MASS SLAUGHTER is absolute garbage.

Just sickening to even think that "hunting" is LEGAL!!! People must stop blaming the animals for their personal issues, needs and problems! This is pure EVIL!!!

We have to kill and destroy everything. I hate humans!

What is wrong with people! By the time they realize this is wrong it will be too late!