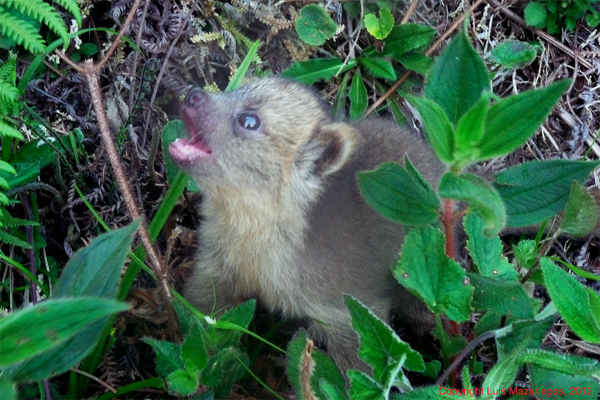 Since its announcement on Thursday, the olinguito—the world’s newest mammal—has taken the world by storm. Hundreds of articles have been written about the new species, while its cuddly appearance has already been made the subject of cartoons. Now, conservationists have released the first photos of a baby olinguito. The new photos come from La Mesenia Conservation Project in Colombia, an Andean cloud forest reserve that is a project area for the NGO SavingSpecies.

Biologists and local people have known about the olinguito for decades, however the small mammal, which has been compared to a cross between a teddy bear and a cat, was confused with its lowland rainforest relatives, the olingos. The mistaken identity ran so deep, that zoos in the past tried to breed the newly-described species with olingos—unsuccessfully, of course. Now, new research appearing in ZooKeys has revealed why: the olinguito is not only a distinct species, but has been separated from its relatives by 3-4 million years. In fact, he olinguito is the smallest of the olingos with a distinct body shape and brighter-colored fur; in addition, it is the only olingo found in high cloud forests. These differences were first noted by lead author Kristofer Helgen, Director of Mammals at the Smithsonian Smithsonian Institution, when he was looking through olingo specimens in museums.

When the news came out announcing the olinguito to the world, conservationists working in the Colombia Andes wondered if their resident olingos were in fact the newly-described species, olinguitos. They e-mailed photos to Roland Kays with the North Carolina Museum of Natural Sciences who helped discover the new species along with Helgen. Kays confirmed that the photos indeed showed olinguitos, including a baby olinguito that was photographed in a nest built in a dead bromeliad.

“All of us are simply delighted to know that we have been helping to protect an animal that was unknown to science less than 48 hours ago—and have been helping to restore its habitat for years!” said Stuart Pimm the head of SavingSpeices and an ecologist at Duke University. “Clearly this is one of the most magnificently biodiverse areas of the world—and who knows what scientists will find next—if the habitat is connected, protected and restored.”

SavingSpecies has been purchasing and reforesting land in degraded areas of the Colombian Andes, in a bid to reconnect forest fragments. The project area is also home to eleven endangered bird species and numerous orchids, including a species in the Dracula genus (see video below). Serendipitously, the project area is also home to olinguitos. Although classified as carnivores (they are in the raccoon family), olinguitos primarily consume fruit. They are largely nocturnal and give birth to one youngster at a time.

The Andean cloud forests are one of the most biodiverse regions in the world, with wide ranges in topography and forest types these ecosystems are also home to a huge number of endemic species (i.e. species found no-where else in the world). However, conservation in the Andean forests has often lagged behind efforts in the Amazon and Central American forests.

“This is exactly the kind of species that our projects help protect—scarce, wide ranging predators are hit hardest when forests become fragmented. By reconnecting a large piece of forest that was almost pinched off, we knew we could make a huge difference,” notes Pimm.

Olinguitos are found only in Ecuador and Colombia. Its discoverers estimated that around 42 percent of the species’ original range had already been lost, although they don’t believe the species is not at high risk of extinction—yet.