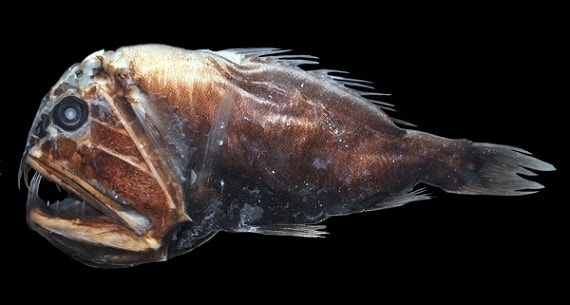 Like something out of your nightmares, the fangtooth (Anoplogaster cornuta, Anoplogaster brachycera) lurks in the darkest depths of the ocean. Wielding huge, saberlike teeth, the fangtooth has the largest teeth in the ocean relative to body size. The phrase “relative to body size” is important to remember here, however: the larger of the two species of fangtooth reaches a maximum length of just 6 inches, rendering these tiny balls of ferociousness harmless to humans.

To its prey — like other fish and squid — however, the fangtooth is a fearsome predator. An aggressive hunter, the fish uses its talon-like teeth to snag its prey. Fangtooth teeth cannot cut or chew, however, so the fangtooth swallows its prey whole, much like a snake does. In adult fangtooths, the largest two fangs of the lower jaw are so long that fangtooths have actually evolved a pair of opposing sockets on either side of the brain to accommodate these massive teeth when the mouth is closed.

Fangtooths have relatively small eyes, set high on the head, and have reduced eyesight. To compensate for this, the fangtooth has an unusually prominent lateral line (a system of sense organs used to detect movement and vibrations in the surrounding waters).

Although the fangtooth has a face only a mother (fangtooth) could love, juvenile fangtooths look very different from adults. While adult fangtooths are uniformly black or dark brown in color and feature those ferocious chompers, the light gray juveniles have larger eyes, long spines on the head, a functional gas bladder, smallers and depressible teeth, and long slender gill rakers which the juveniles use to filter zooplankton from the water. These morphological differences are so dramatic, in fact, that juvenile fangtooths were mistakenly classified as a separate species until 1955!