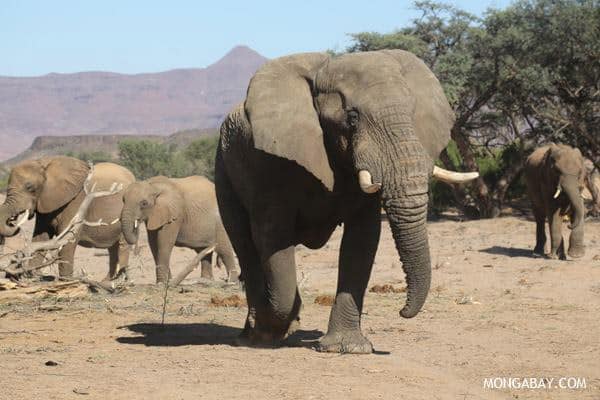 Beginning next year, light planes and helicopters will undertake the first ever continent-wide aerial survey of Africa’s vanishing elephant populations. The hugely ambitious initiative, which will count elephant herds in 13 countries, is being funded by Microsoft founder, Paul Allen, through his Paul G. Allen Family Foundation.

The new survey, which is estimated to cost around $8 million, will be coordinated by Elephants Without Borders (EWB). Elephants are currently found in 35 countries, however in 20 of these populations are less than 1,000. The new survey will stick to countries with larger populations. The announcement was made at the African Elephant Summit in Botswana yesterday.

“This is the bleakest time for the elephants,” Allen said in a press release. “The statistics on the plight of Africa’s elephants is daunting. I’m devoted to supporting new endeavors which provide meaningful science to help reverse this decline and to reduce the variability in elephant population statistics.”

Africa’s elephants have been decimated by poachers over the last five years as illegal ivory trading has soared in countries like China and Thailand. A recent report estimated that 22,000 elephants were killed in Africa last year alone, however an early estimate put the number at 35,000.

According to scientists around half a million elephants roam Africa today, down from about 1.3 million in the 1970s. But many herds have not been surveyed for years causing a great deal of uncertainty about the actual numbers of the world’s biggest land animal. The survey will focus on the 13 states with the largest elephant populations, comprising between 80-90 percent of Africa’s total.

The IUCN Red List currently lists African elephants as Vulnerable, however the assessment was made in 2008 just before poaching skyrocketed. Moreover, recent genetic research has shown that there are actually two distinct species of elephant in Africa: the savanna elephant (Loxodonta africana) and the forest elephant (Loxodonta cyclotis), which is largely found in Central Africa. The forest elephants has been especially decimated by recent poaching.