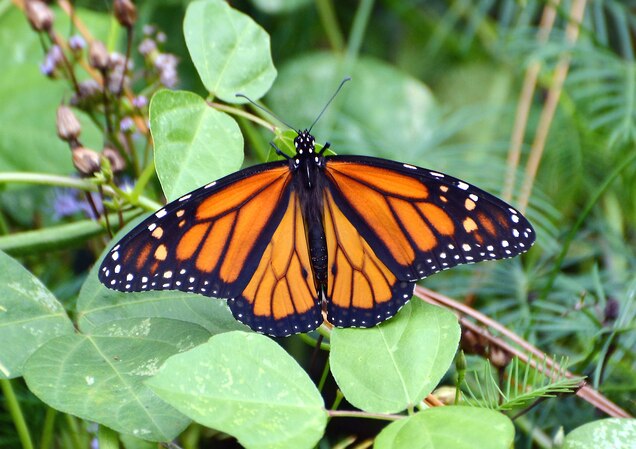 Migrating monarch butterflies are in “grave danger,” according to a report that shows their colonies in Mexico now occupy the smallest area since records began in 1993.

The report is based on a survey of Mexico’s Monarch Butterfly Biosphere Reserve done in December 2013. The butterflies, which spend the winter hibernating in the reserve’s forest, occupied only 1.65 acres (0.6 hectare) in December 2013—a 44 percent drop from 2012, when the insects covered 2.76 acres (1.12 hectares) of land. The survey was conducted by the WWF-Telcel Alliance and Mexico’s National Commission for Protected Areas.

Though monarchs are found in many parts of the world, the migratory monarch is the most thoroughly studied, since it’s the group that’s most at risk. (Watch a video of monarch butterflies.)

Omar Vidal, director general of WWF-Mexico, noted by email: “The monarch butterfly as a species is not endangered. What is endangered is its migratory phenomenon from Canada to Mexico and back.”

The number of migrating monarchs is plummeting for a few reasons: widespread loss of a plant called milkweed, which their young rely on for food; extreme climate fluctuations in North America, including freezing temperatures and heavy rain; and deforestation.

This could be bad news for many ecosystems because monarchs pollinate plants, including some that people rely on for food, such as corn.

The decline is especially worrisome because it’s been going on for three years. “Data from previous time periods usually show a pattern of ups and downs,” Karen Oberhauser, a monarch expert at the University of Minnesota in Minneapolis, said by email. She believes the survey may have even underestimated the population drop.

Weighing in at 0.0095 to 0.026 ounces (0.27 to 0.75 grams), the monarch is noteworthy for its migration. Every autumn, millions fly south and west from southern Canada and the United States, stopping at sites along the way to breed and feed—a process that takes thousands of miles and spans five generations.

Most adult butterflies live only about a month, but the fifth generation lives about seven to eight months—the time required to fly from Canada and the U.S. to central Mexico, according to the WWF.

That group ends up in the forests of the Mexican states of Michoacan and Mexico, where they hibernate before the cycle begins anew.

To complete the migration to Mexico, butterflies need to lay their eggs on a specific plant: milkweed. Once hatched, monarch larvae eat milkweed leaves as their first meal.

Milkweed is not a favorite of farmers, though. Once widespread throughout the U.S., the plant has seen its range fall 58 percent due to herbicide use, especially on corn and soybean fields.

Another threat to butterflies is climate extremes, including the droughts, heat waves, and storms that have hit North America in recent years. For instance, monarch numbers were very low in 2005 and 2006 most likely because of a severe drought in the U.S.

It’s not easy, but there are ways to halt the decline by recruiting the help of all three North American countries, Oberhauser noted.

For instance, incorporating milkweed into large-scale plantings wherever possible—including marginal lands like roadsides—is one strategy.

“Given the conservation challenges facing monarchs, it’s vitally important that we mobilize as many people as possible,” Oberhauser said.

“Through our collective efforts, monarch populations can rebound, so that their migrations may be appreciated by many generations to come.”