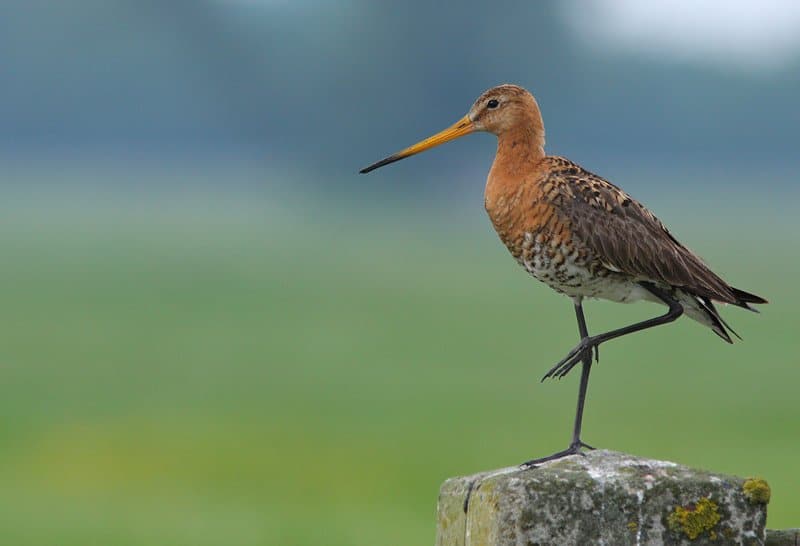 For the last few years, VBN/BirdLife Netherlands has been working closely with Dutch farmers in the hopes of making the country’s world-famous dairy products as sustainable and nature-friendly as they are tasty. Gerrit Gerritsen tells us more about a most promising start.

International studies recently showed Dutch men to be the tallest in the world, standing on average at 1.84 metres – remarkably, some 20 cm taller than 150 years ago. But how did a nation once reputed for being short suddenly leap-frog to the top of the ladder?

Many were quick to speculate the answer was obvious: a dairy rich diet in Edam, Gouda and Leerdammer. It surely couldn’t be a coincidence that the land of the big cheeses is now the land of the giants.

Though the factors behind this national growth spurt are almost certainly more complex, it is undeniable that dairy is big business in the Netherlands. After World War II, the Dutch government started a huge project to improve production in the dairy industry.

Decades of large-scale national and EU grants further accelerated the process. Now, 70 years later, milk production is so great that we only need 20% for national consumption. The remaining 80% is exported, mainly as cheese or (baby) milk powder.

But this enormous economic success has also had disastrous consequences for our farmland biodiversity, rural landscapes and animal welfare. And it has also brought many disadvantages for small and medium sized farmers. O

ur lands were once resplendent with meadow birds but drainage, early mowing and the widespread transformation of biodiverse grasslands into sterile monocultures have all taken their heavy toll. Within a few short decades, we lost almost all of our populations of Ruff and Skylark and a disheartening number of Black-tailed Godwit – the national bird[1]. ‘Silent spring’ has fallen upon the lowlands.

In some parts of the country, farmers can partake in Agri-environmental schemes (AES) under the EU’s Common Agricultural Policy (CAP). Though such schemes are designed to slow down the decline of farmland birds, the reality is less bright – issues with bureaucracy, management quality, short-termism and insufficient budgets all conspire to make good intentions go bad. In fact, the European Court of Auditors recently published a damning report on the chronic failures of CAP Greening which it described as ‘not yet environmentally effective’.[2]

Since 2012 Vogelbescherming (VBN/Birdlife Netherlands) has been reaching out to the Dutch dairy industry in an attempt to convince them that biodiversity measures should be at the heart of their of their sustainability programs and can also be a successful part of their business model. Though the conversation is still ongoing, we’re already starting to see some promising results…

In 2014 we launched a new cheese from an organic, biodiversity-rich farm where 33% of the grasslands are mown after mid-June, by which time Black-tailed Godwit chicks are able to fly. On this farm, the BTG-management is paid by agri-environmental schemes and out of the profits from the cheese. The farmer, Henk Pelleboer, also organizes Birdwatching-safaris and thousands of people visit his farm yearly. The cheese has been a commercial success with the public, but with only 60 selling points, it’s time to start thinking about the next step up – supermarkets.

In 2016 we successfully launched a new range of milk, yoghurt and cottage-cheese products in cooperation with the dairy-cooperation Noorderlandmelk. The brand, called Weide Weelde (Luxury Meadows) proudly bears the BirdLife logo and is sold in most Jumbo supermarkets, the second biggest supermarket chain in The Netherlands. The Weide Weelde milk comes from twelve non-organic farms in the north of the country. Each farm is obliged to write a nature management plan, helped by an advisor payed for by the dairy-industry. At the start, they managed at least 10% of their farm in a bird-friendly way and after three years this shot up to 20%.

VBN is actively promoting all these delicious, bird-friendly products with our members, and the momentum of interest – with both the dairy industry and consumers – is picking up speed. Just last year, we signed an agreement with the bio-dynamic farmers behind the brands Zuiver-Zuivel and Weerribben-Zuivel. We think this could be the beginning of a beautiful friendship!

[1] The Black-Tailed Godwit is one of the target bird species in BirdLife’s LIFE EuroSAP project which aims to halt the population decline of sixteen species of iconic European birds on a continental scale. This three-year project tackles one of the recurrent problems in species-conservation: the deficiencies in national and international coordination and implementation of Species Action Plans (SAPs).

This article was first published by BirdLife International on 26 Mar 2018.

Keep up the good work, don’t ever stop!