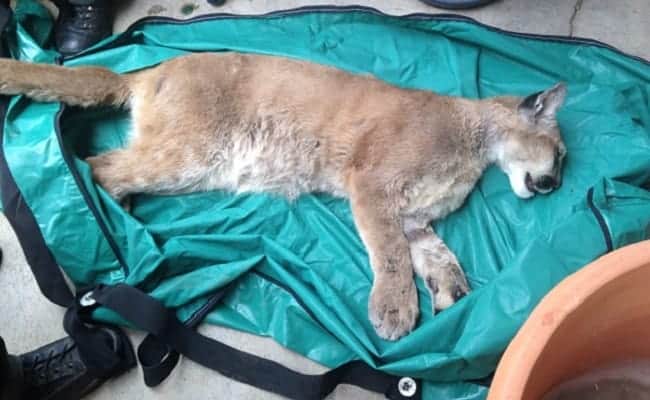 When three mountain lion cubs were discovered with their mother, P-39, in the Los Angeles area last July, experts were concerned about the cubs’ chances for survival.

Among the threats to mountain lions living in the Santa Monica Mountains are death due to ingesting rat poison, health issues caused by inbreeding, and, most dangerously, the busy, eight-lane freeways they must cross to wander outside their limited territory.

Sadly, the experts’ concerns proved to be well founded. Last December, P-39 was killed when she tried to cross the 118 freeway. Just a few weeks later, one of her cubs, P-52, was killed in almost the same place, trying to do the same thing. And a few weeks after that, his sibling, P-51, was also struck by a car and killed on the same freeway.

As for their brother, P-50, he seemed to have just disappeared. No one knew if the young mountain lion was dead or alive until May 5, when P-50 was discovered in a garden store in Chatsworth — literally just yards from the 118 freeway.

Officers with the California Department of Fish and Wildlife (CDFW) tranquilized the mountain lion and were able to identify P-50 by his ear tag. Even though his mom wasn’t around to help him learn how to hunt, P-50 had figured out how to do it on his own, surviving by eating small mammals.

“Although it’s not entirely surprising, this story is a great example of the innate survival instinct that mountain lions possess,” Rebecca Barboza, a wildlife environmental scientist, said in a statement on the CDFW’s Facebook page. “Wild animals are adaptable and have an uncanny ability to survive in these types of situations.”

In response to suggestions earlier this year that P-39′s orphaned cubs be moved away from L.A. to a safer area, Kate Kuykendall of the National Park Service told KPCC it’s against California’s fish and game code to remove mountain lions from their natural habitat.

But a few months later, the CDFW apparently decided it would be in surviving cub P-50′s best interest to be relocated to a safer habitat.

To help give P-50 a better chance at survival, while he was tranquilized he was given a quick physical examination to make sure he was healthy and then relocated to the Santa Susana Mountains about 9 miles north of Chatsworth, where he won’t be so close to busy freeways.

Hopefully P-50 will live long enough to be able to use a wildlife corridor across the 118 freeway that’s currently in the planning stages. But it could take four years or longer before the bridge, which will be the first of its kind in California, is completed. Without a bridge providing a safe crossing over the freeway, Los Angeles mountain lions are almost 100 percent likely to become extinct in 50 years due to inbreeding, which can cause health problems and unusual behavior.

When P-50 and the CDFW officers arrived in the Santa Susana Mountains, Warden Kory Collins waited for P-50 to wake up to make sure the mountain lion would be able to safely walk away on his own – and, as you can see, off he wobbled.

On Friday, May 5, CDFW wildlife officers responded to reports of a young mountain lion in a nursery (gardening center) in Chatsworth, south of SR 118. After the cat was tranquilized, officers discovered a small ear tag identifying it as P50 – one of three kittens born to mountain lion P39, who was struck and killed by a car on SR 118 in December 2016. At the time of P39’s death, scientists believed that her seven- to eight-month-old kittens were old enough to hunt and survive on their own. Unfortunately, two of the three kittens were also later killed by vehicle strikes. The whereabouts of the third kitten, P50, were unknown until now. After a brief physical examination, wildlife officers moved P50 to more suitable habitat in the Santa Susana Mountains. After waking up from the tranquilizer, he was able to safely walk away on his own. CDFW staff report that the cat was healthy and in good shape, and there was evidence on-scene that it was successfully hunting small mammals. “Although it’s not entirely surprising, this story is a great example of the innate survival instinct that mountain lions possess,” said CDFW Rebecca Barboza, a wildlife environmental scientist. ”Wild animals are adaptable and have an uncanny ability to survive in these types of situations.”