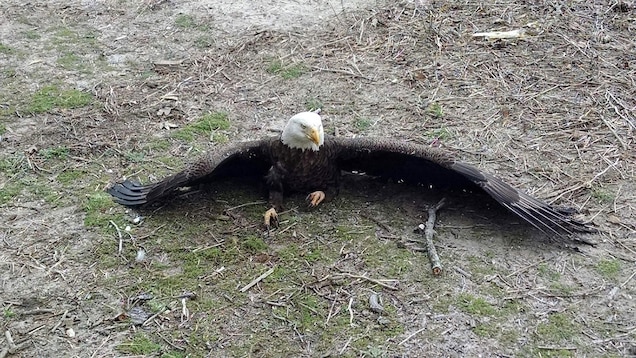 While we watched the live cam in awe as a bald eagle hatched two babies at the U.S. National Arboretum in Washington, D.C., over the weekend, a mysterious bald eagle tragedy was unfolding a hundred miles away in Delaware.

On Saturday, someone phoned state officials after finding five disoriented eagles in a farm field in Sussex County.

Three of those birds died in transport after resuscitation efforts failed, and the other two were transferred to a rescue center. Another dead eagle was found a mile away.

On Sunday a fifth bird was discovered dead and another injured when investigators went back to the field for a follow-up look.

This comes about a month after 13 bald eagles were discovered dead—not of natural causes—on Maryland’s Eastern Shore, just 30 miles away.

Investigators haven’t determined how the most recent batch of birds died. “We’re not at that point yet where we know the cause of death,” said Catherine Hibbard, a spokesperson for the U.S. Fish and Wildlife Service, which is investigating the case along with the Delaware Natural Resources Police.

The bird carcasses will be sent off to the federal forensic ornithology lab in Ashland, Oregon, to determine the cause of death. As of now, officials haven’t found a connection between this weekend’s incident and the Maryland deaths. “But if anything from the investigation suggests that, we’ll look at it more closely,” Hibbard added.

To Hibbard, the death of as many as 13 bald eagles was shocking, but it’s not as surprising for a smaller number of the birds to turn up dead. In recent years on the Eastern Shore, officials have found a few eagles killed by poisons landowners had put out to eliminate foxes or other animals,” she told National Geographic last month.

But overall, the picture for bald eagles has been brightening, as we wrote in February:

The national symbol of the U.S., bald eagles were nearly wiped out by hunting, pesticides, and habitat loss in the 20th century. However, they have rebounded in recent decades thanks to strict protections and banning of DDT, which caused their eggshells to be too thin. Bald eagles were officially removed from endangered and threatened status in the U.S. in 2007, although they are still protected under the Bald and Golden Eagle Protection Act and the Migratory Bird Treaty Act.

If people are ultimately convicted of causing the death of the eagles, they could face a fine as high as $100,000 and prison time up to one year as a result of those acts.

“After all that’s been done to get bald eagles off the endangered species list, it’s disturbing to see these eagles die,” Hibbard said.

This article was first published by National Geographic on 21 Mar 2016. Lead Image: This is one of the eagles recovered in Delaware over the weekend. The cause of death of five of the birds is uknown. Photograph by DNREC Division of Fish & Wildlife Natural Resources Police.