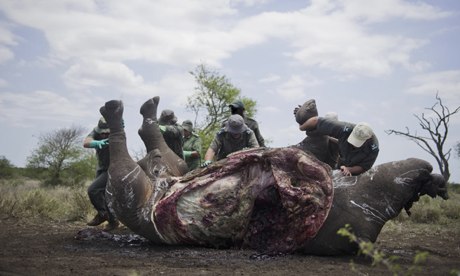 More than 1,000 rhinos were killed in South Africa last year at a record-breaking rate that marked a jump of 50% on the year before. The environment ministry said 1,004 animals were killed in 2013, up from 668 in 2012 and just 13 in 2007, as the poaching crisis escalated. Most of the killing was in Kruger national park, a famous safari destination.

Appetite for rhino horn from Asia, in particular Vietnam, has driven the killing in South Africa, which ministers have warned in turn threatens the country’s tourism sector. Demand is so high that a kilogramme of rhino horn is now worth more than gold or cocaine.

The UK prime minister, David Cameron, is hosting a summit in London next month in a bid to tackle the trade which has also seen tens of thousands of elephants killed in Africa annually in recent years.

Conservationists said action must be taken now. Tom Milliken, rhino expert at wildlife trade monitors Traffic, said: “South Africa and Mozambique [a transit hub for wildlife products leaving Africa] must decisively up their game if they hope to stop this blatant robbery of southern Africa’s natural heritage. 2014 must mark the turning point where the world, collectively says ‘enough is enough’ and brings these criminal networks down.

Governments and NGOs have argued in recent years that the illegal wildlife trade has become a national security issue, rather than just an environmental one. The channelling of funds from poaching to terrorist groups has led the US intelligence community to begin tracking often heavily-armed poachers.

“Rhino horn trafficking and consumption are not simply environmental issues, they represent threats to the very fabric of society,” said Miliken.

Dr Jo Shaw, rhino programme manager for WWF-South Africa, said: “These criminal networks are threatening our national security and damaging our economy by frightening away tourists.”

South Africa said it increased the number of arrests of poachers from 267 in 2012, to 343 in 2013, though the number represents a decrease in the percentage of rhinos killed in total.

The crisis shows little sign of stopping – the South African government said 37 rhino have already been poached in 2014. There are around 18,000 white and 4,000 black rhinos in the country.