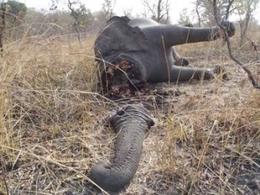 Elephant massacre continues – Poachers slaughtered at least 200 elephants for their tusks in Cameroon in a continuing killing spree that began in mid-January.

The International Fund for Animal Welfare (IFAW) said an armed gang of Sudanese poachers had killed the free roaming elephants in the Bouba Ndjida National Park in northern Cameroon, near the border with Chad.

At least 100 elephant carcasses have been found in the park in the past month and ongoing shooting is making it impossible to conduct a further, detailed assessment of the situation. It is understood that more carcasses are expected to be found in unexplored regions of Bouba Ndjida.

Orphans – According to reports, many orphaned elephant calves have been spotted abandoned following the shootings and concerns are high the babies may soon die of hunger and thirst. Their deaths will only compound the impact of the poaching spree on the Cameroon’s threatened elephant populations.

IFAW’s Celine Sissler-Bienvenu said it was common for armed gangs of poachers to cross from Sudan during the dry season to kill elephants for their ivory. But this latest massacre is massive and has no comparison to those of the preceding years.

Ivory smuggled to Asia – “The ivory is smuggled out of West and Central Africa for markets in Asia and Europe, and the money it raises funds arms purchases for use in regional conflicts, particularly ongoing unrest in Sudan and in the Central African Republic,” said Sissler-Bienvenu.

The embassies of the United States of America, European Union, United Kingdom and France have sounded alarm bells on the Bouba Ndjida elephant killings and have called on the Cameroon authorities to take urgent action to stop the killing.

Cameroon shares a border with Chad which, in turn is bordered to the east and south by Sudan and the Central African Republic. Armed insurgents seeking elephants frequently cross the porous borders on poaching raids in Cameroon and Chad.

Few elephants left in Chad – Sudanese poachers, who travel south through Chad on their way to Cameroon, are thought to be responsible for the killings. In the past few years Chad’s elephant population has dropped from several thousand to just a few hundred, sending the heavily armed poachers further afield.

Celine Sissler-Bienvenu, IFAW France’s Country Representative, said: “These are well-armed, well-organised gangs and nothing seems to be able to stop their reckless pursuit of ivory. They are targeting one of the most vulnerable elephant populations in Africa. The ivory from these slaughtered elephants is flowing out of Africa at an uncontrollable rate.”

Sissler-Bienvenu added: “Elephants killed by poachers experience tremendous fear and suffering before dying. Often professional poachers – some of whom are former or current soldiers – are armed with military weapons such as AK-47s. The AK-47 is designed to kill a person who weighs 70-80kgs. In order to kill an elephant weighing 5,000kgs you have to use a lot of bullets and it can take a very long time for the animals to die.”

Cameroon elephant population – It is uncertain how many elephants there are in Cameroon but, according to the Elephant Status Report of 2007 of the IUCN (International Union for Conservation of Nature), possibly between 1,000 and 5,000 individuals remain.

Sissler-Bienvenu said the only answer to ending the bloody onslaught against Cameroon’s elephants and those under threat elsewhere in Africa, was to kill demand for ivory especially in Asia and to ensure conservation officials in range states were provided with skills and the equipment necessary to counter professional gangs of poachers.

IFAW is about to begin a programme of anti-poaching support for rangers and law enforcement officials in Chad’s Sena Oura National Park – Sena Oura NP lies along the Chad/Cameroon border. IFAW’s support is intended to help establish a coordinated approach to safeguarding elephants in the region.

“Since 2009 IFAW has provided anti-poaching assessment, training and support to rangers and conservation officials in central African countries which face severe challenges in the fight to end the bloody and cruel illegal ivory trade,” said Sissler-Bienvenu.

“What these countries now need is the commitment of the international community to financially support these highly skilled and motivated trainees to be able to meet the task of protecting elephants.”