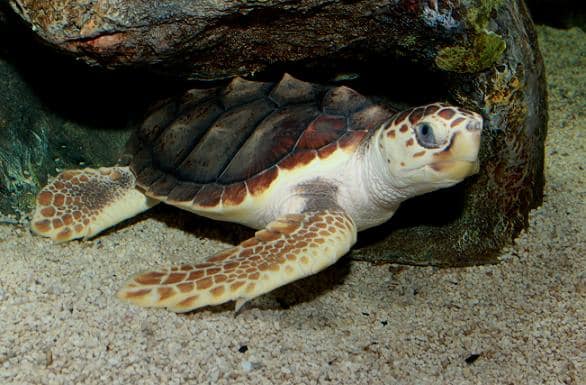 This morning the government announced a decision, long in the making, to designate more than 739 miles of Atlantic and Gulf coastline as critical habitat for threatened loggerhead sea turtles. Loggerheads face threats from all sides, including from pollution, degradation of foraging areas, and serious injury and death from entanglement in fishing gear. They’re also faced with the loss of their nesting habitat due to coastal development as well as sea level rise.

Loggerheads, which make some of the longest journeys of any sea turtle—across entire ocean basins—nest on beaches from Texas to Virginia, but 90 percent of U.S. loggerhead nesting occurs in Florida. This new protection means that any new beachside hotels, homes or commercial construction built on protected beaches that require federal permits would need to be reviewed to prevent harm to nesting areas.

“Turtles are often caught in fishing gear, struck by moving vessels, or risk ingesting debris such as plastic bags. The National Marine Fisheries Service must follow up on this action and designate off-shore areas as well as waters directly adjacent to nesting beaches if they want these vulnerable populations to recover.”

The new protections came about as a result of a lawsuit filed earlier this year by the Center for Biological Diversity, Oceana, and Turtle Island Restoration Network, after the government failed to respond to previous petitions filed by the groups dating back to 2007. In 2011, loggerhead sea turtles worldwide were protected as nine separate populations under the Endangered Species Act, triggering the requirement to designate critical habitat.

The government will now accept public comments about the proposal and the protections are expected to take effect in 2014. Stay tuned to hear about ways that you can help ensure that the U.S. Fish and Wildlife Service does not withdraw many of these proposed beaches when these protections are finalized.