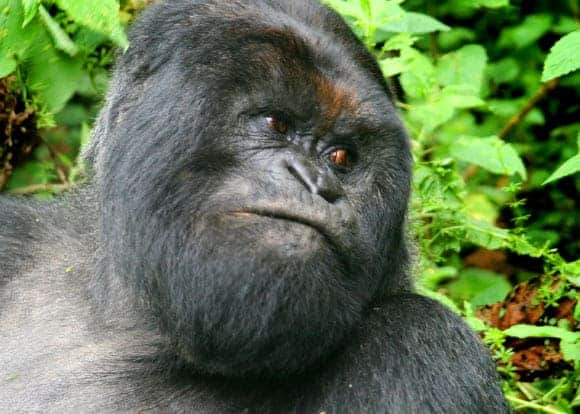 A team of genetic scientists, co-led by Dr Chris Tyler-Smith of the Wellcome Trust Sanger Institute and Dr Aylwyn Scally of the University of Cambridge, UK, has sequenced the whole genome of the mountain gorilla (Gorilla beringei beringei) and compared it with the genomes of three other Gorilla subspecies – the western lowland gorilla (G. gorilla gorilla), the Cross River gorilla (G. g. diehli), and the eastern lowland gorilla (G. b. graueri).

It is one of the world’s largest primates with the male, known as a silverback, often growing to twice the size of a female mountain gorilla. On average, adult males weigh 160 kg, and adult females 98 kg.

Mountain gorillas live in tight-knit, nomadic groups of about 10 animals, led and protected by a dominant male. They roam the forest in search of stems, leaves, and shoots.

These gorillas are found at high altitudes (2,500-4,000 m) in montane forests, as well as bamboo forests.

They are known from two separate locations: the Virunga range of extinct volcanic mountains on the borders of the Democratic Republic of Congo, Rwanda and Uganda, and in the Bwindi Impenetrable National Park in Uganda. Some scientists believe the Bwindi gorillas may be a separate subspecies.

“Mountain gorillas are among the most intensively studied primates in the wild, but this is the first in-depth, whole-genome analysis,” said Dr Tyler-Smith, a co-author of the paper published in the journal Science.

“Three years on from sequencing the gorilla reference genome, we can now compare the genomes of all gorilla populations, including the critically endangered mountain gorilla, and begin to understand their similarities and differences, and the genetic impact of inbreeding.”

Dr Tyler-Smith and his colleagues interested to learn how such a small gene pool would affect the mountain gorillas were surprised to find that many harmful genetic variations had been removed from the population through inbreeding, and that mountain gorillas are genetically adapting to surviving in small populations.

“This new understanding of genetic diversity and demographic history among gorilla populations provides us with valuable insight into how apes and humans, their closely related cousins, adapt genetically to living in small populations,” Dr Scally said.

“In these data we can observe the process by which genomes are purged of severely deleterious mutations by a small population size.”

Using blood samples collected over several years, the team was able to sequence the whole genomes of seven mountain gorillas.

The scientists could now see that these mountain gorillas, along with eastern lowland gorillas, were two to three times less genetically diverse than gorillas from larger groups in western regions of central Africa.

While there are concerns that this low level of genetic diversity may make the mountain gorillas more vulnerable to environmental change and to disease, including cross-infectious strains of human viruses, the inbreeding has, in some ways, been genetically beneficial.

These variants stop genes from working and can cause serious, often fatal, health conditions.

By analyzing the variations in each genome, the scientists also discovered that mountain gorillas have survived in small numbers for thousands of years.

Using recently-developed methods, they were able to determine how the size of the population has changed over the past million years.

According to the study, the average population of mountain gorillas has numbered in the hundreds for many thousands of years; far longer than previously thought.

This article was first published by Sci-News.com on 09 Apr 2015.