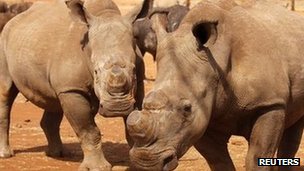 Three Mozambicans have been sentenced to 25 years each in a South African court for rhino poaching, according to the South African national parks body. The men were found guilty of illegally hunting rhino in the Kruger National Park in July 2010.

The head of SANParks, David Mabunda, said the sentence was harsher than other similar cases. In 2011, a record 450 rhino were killed in South Africa, according to the Department of Environment Affairs.

“This is an indication that, as a country, we are taking more stringent measures in the fight against rhino poaching,” Mr Mabunda said in a statement. Aselmo Baloyi, Jawaki Nkuna and Ismael Baloyi were found guilty on four charges, including illegal hunting of a rhino and possession of a prohibited firearm.

They were caught with two freshly chopped rhino horns, an assault rifle, a hunting rifle and an axe. Mr Mabunda said that last year 232 suspected poachers were arrested, including 26 who died in fights with the authorities.

Large syndicates are involved in this multi-billion dollar trade worldwide – exporting the horns from Africa to parts of Asia and the Middle East. South Africa has been the focal point of poaching because it has the largest population of rhinos in the world, with 1,916 black rhinos and 18,780 white rhinos.

Poachers use a chainsaw to cut away a rhino’s horns, after darting it with a tranquilizer – drugged and helpless the animal bleeds to death, says the BBC’s Pumza Fihlani in Johannesburg. The country’s government has commissioned a study into whether legalising trade in rhino horn could help to bring down poaching.

This article was written and published by BBC News Africa