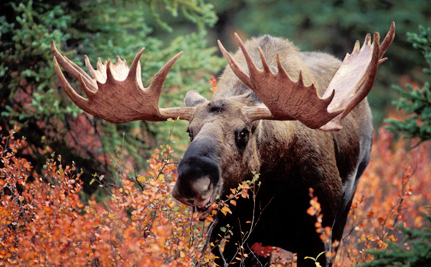 Moose are quickly disappearing across North America in large numbers. While there are a few theories as to why, scientists have yet to pinpoint the exact cause.

Once thriving moose populations have dwindled in numbers at an unprecedented rate, raising concerns about how their disappearance will affect the ecosystem and how their absence will affect tourism. So far, there are a few explanations about why they’re dying in such large numbers that mostly point to changes resulting from shorter winters and a warming climate. There’s still no one definitive cause, but possibilities include heat stress, parasites and loss of forest cover that is being destroyed by pine bark beetles.

Shorter and warmer winters in their range have allowed some parasites to thrive. Though tiny, winter ticks have proven to be one formidable foe, and deer are fairly good at getting them off, moose are another story.

After the eggs hatch at the end of summer and early fall, the larvae climb onto vegetation and look for a host. If they hop on one, they’ll stay there until they reach the adult stage during winter, feeding all the while. The males stay on, but the females fall off after they’re engorged. If there’s still snow on the ground when they fall, they might not survive, but earlier snow melts mean more are surviving and laying eggs that will grow and take down more moose the following year.

It’s hard to imagine how something so tiny can take down such a large animal, but one moose can have more than 100,000 of these tiny bloodsuckers, who can do serious damage, at once. Moose dealing with the stress caused by these infestations suffer from the effects of blood loss and end up spending more time trying to rid themselves of them than they do eating. They also rub off their coats off, which leaves them less able to regulate their body temperature and keep warm. Without longer winters and hard freezes to kill the larvae and adults, winter ticks will continue to flourish.

Scientists also believe brain worms and liver flukes are responsible for moose deaths in Minnesota. Brain worms, which spend their winters as larvae in snails and are eaten unintentionally with plants, can live in white-tailed deer without causing problems, but the parasite leads to neurological disease, paralysis and eventually death in moose. Liver flukes, on the other hand, may not always kill moose, but they can cause enough trouble to weaken them and make them susceptible to other infections.

Regions in Canada and other states across the U.S. have seen dramatic disappearances as a result of these problems. Of Minnesota’s two populations, one has almost completely disappeared, dropping from 4,000 in the 1990s to fewer than 100, while the other has gone from 8,000 to fewer than 3,000, reports the New York Times.

The losses have scientists and wildlife officials worried, and they’re taking the issue seriously. Not only do moose fill an ecological niche by providing a food source for other animals creating habitats for smaller animals through browsing, but they also generate revenue by captivating wildlife enthusiasts. In New Hampshire, moose tours alone bring in $115 million in trip-related expenses every year, according to theConcord Monitor.

In February, Minnesota announced it was canceling its hunting season this year and will be tracking moose with radio collars that notify researchers when moose have died. This summer New Hampshire approved $695,000 for a four-year study of the state’s moose, which will also involve tracking them with radio collars. Kristine Rines, a biologist with the New Hampshire’s Fish and Game Department told the Times that at least one solution for dealing with the problem ticks are causing may, ironically, be more hunting in order to stop their prolific cycle.