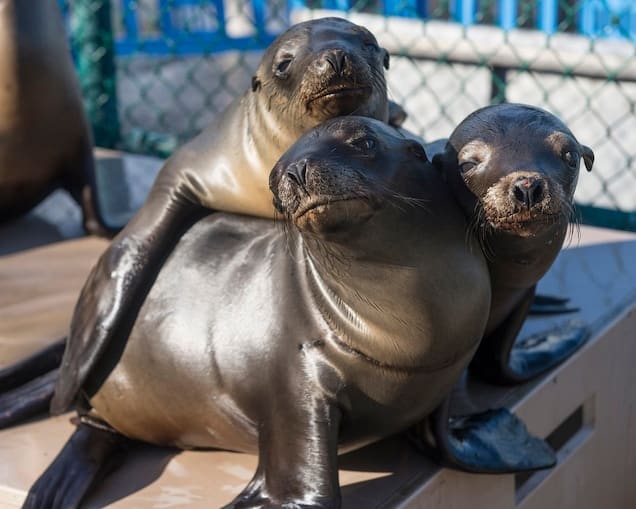 For the third winter in a row, starving sea lion pups are washing ashore on California’s beaches. Since January 1, nearly 500 of the tiny animals have been admitted to the state’s rehabilitation centers—a number many times higher than normal. Why these animals are struggling to survive is a mystery, and early stranding numbers suggest that 2015 could be even worse than the previous two years.

“They’re extremely emaciated, basically starving to death,” says veterinarian Shawn Johnson of the Marine Mammal Center in Sausalito. Here, the snorty symphony of rescued sea lions is accented by the continual ringing of rescue hotlines. So far, the facility has responded to 171 stranded sea lions.

The calls are coming at a much faster pace than usual. Last year, it took until April for the Sausalito facility to receive a hundred sea lions, but this year the center has seen that many sea lions in the past ten days alone.

Now, with peak stranding months still on the way, rescue centers along the California coast are bracing for more.

“We’re all kind of holding our breath,” says Justin Viezbicke, stranding network coordinator for the National Oceanic and Atmospheric Administration.

California sea lions (Zalophus californianus) are considered a sentinel species, meaning they’re seen as indicators of ocean health. Generally, if sea lions are suffering, something is wrong offshore. In this case, scientists still don’t really know what that something is.

Starting in January 2013, waves of starving sea lion pups began washing ashore in southern California. Rescuers found them in flowerpots, beneath parked cars, resting on the porch of an ocean-side resort.

Rehab centers were overwhelmed. But it wasn’t just the sheer number of pups that was alarming: Sometimes weighing less than half of what they should, the tiny animals were showing up extremely early in the year, at a time when they should have been relaxing on their Channel Island nurseries and plumping up on mom’s milk.

Put simply, something mysterious was causing the young sea lions to leave home long before they were ready. The situation looked even worse on the islands, where surveys suggested that more than 50 percent of pups were dying.

In March, NOAA declared the situation an Unusual Mortality Event and organized an investigation. Scientists noted that the stranding pattern resembled that of severe El Niño years, when warm ocean waters supplant the cool, nutrient-rich waters that normally fuel the area’s ecosystems.

The trouble was, these weren’t El Niño years. And aside from the struggling pups, nothing else was obviously wrong. No other species were similarly affected, and even adult sea lions seemed fine. By summer, when the strandings finally subsided, more than 1,600 pups had come ashore.

Six months later, in January 2014, strandings started to swell again. Skinny pups arrived in droves, though in lesser numbers than the previous year.

Now, 2015 is looking even worse. After just six weeks, more than 470 sea lions have been admitted to California rehab centers. And they aren’t just in the southern parts of the state, as before.

Early Monday, a team from the Marine Mammal Center plucked a pup, now called Murray, from the beach at the northern California center’s doorstep.

Murray and his friends stay in pens at the facility, where their chief goal is to gain weight. Many of the pups are too young to eat whole fish, so they get a stinky, smoothie-like puree of fish bits.

As the pups grow older and stronger, they will learn how to catch fish and must graduate from “fish school” before they can be released into the wild. The process can take months.

“These guys are all pretty darn emaciated,” says Caitlin Brown, a veterinary intern at the center. “It’s rough being a baby out there.”

Scientists still don’t know what triggered such a precipitous and ongoing struggle; they’ve ruled out known diseases and environmental toxins, which might be expected to affect more than just pups. Some researchers question whether the sea lion population has grown so large that the offshore environment simply can’t sustain their numbers.

The best guess now is that shifts in fish populations—primarily fatty sardines—are causing nursing sea lion mothers to swim farther in search of fish. Those extended forays keep sea lion moms away from their pups. For so long, perhaps, that the tiny animals wait on their beaches and starve until they eventually strike out on their own, long before they’re ready to tackle the Pacific Ocean.

But the picture isn’t complete yet. NOAA teams are out on the Channel Islands right now, studying the sea lion population and trying to fill in the gaps.

One thing they’ve seen emerge over the past year is a massive, persistent patch of warm ocean water that has settled offshore and may be knocking the ecosystems of western North America off-kilter.

“It’s been a really unusually warm year, and disruptive to the normal marine food web, from Baja all the way up to Alaska,” says Nate Mantua of NOAA’s Southwest Fisheries Science Center.

Starting in early 2014, Mantua says, wind and weather patterns spawned patches of warm water from Mexico to Alaska; in late 2014, those patches merged, and it’s tough to say how long the resulting mega-blob will hang around.

Among the oddities linked to the warm water are fish, turtles, crabs, and other animals showing up in weird places. There’s even a potential link to an unprecedented die-off of seabirds called Cassin’s auklets, which are dropping dead by the thousands in the Pacific Northwest.

For now, it’s too soon to say whether the warm-water blob is affecting the sea lions, or if the sea lion pups are heralding the demise of something else beneath the waves.