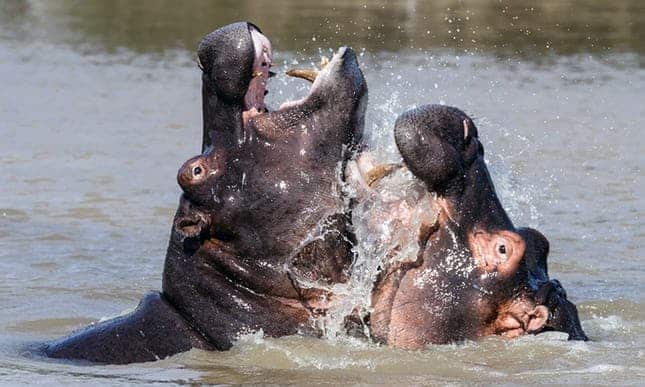 More than 100 hippos have died in Namibia in a remote national park in the past week, the country’s environment minister said on Monday, warning that anthrax could be to blame.

Images from the Bwabwata national park in north-east Namibia showed dozens of lifeless hippos, some flat on their backs, others with just their heads visible above murky water.

“Over 100 hippos died in the past week. The cause of death is unknown but the signs so far show that it could be anthrax,” Pohamba Shifeta told AFP.

He said the toll could be higher as crocodiles might have eaten some of the carcasses.

Anthrax is a bacterial disease commonly associated with arid climates like the African savannah, where it kills game, cattle and sometimes humans.

Government officials estimated that Namibia’s hippo population was around 1,300 before the mass death.

The minister added that he would be alarmed if there were any further hippo deaths at the national park, which is one of the country’s foremost tourist attractions.

This article was first published by The Guardian on 09 Oct 2017.