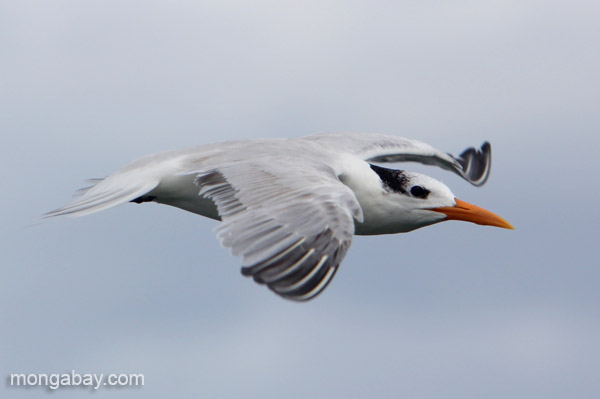 A recent study from the Biological Conservation journal brings shocking news: every year across the globe, an estimated 400,000 seabirds are killed by gillnets.

Gillnets, a common term for any net used to entangle and catch fish, are used all over the world, and at any depth. These nets, whether used in subsistence or commercial fishing, trap anything that swims through them. When unintended marine wildlife, or “bycatch,” is caught in these nets, the results can be significant.

“Fishermen do not try to catch seabirds or other unwanted species, but they usually set their nets in productive marine areas with abundant fish resources, which are also home of other marine fauna,” co-author Ramunas Zydelis told mongabay.com in an interview. “In such places seabird habitats overlap with fishing grounds and subsequently some diving birds accidentally entangle in fishing nets and drawn as they cannot return to the water surface.”

The study synthesized previously collected data from around the world. Overall, it identified 148 different seabird species at risk for becoming gillnet victims, of which 81 have been officially reported as bycatch.

“Bird bycatch in gillnets is net type-specific and species-specific. Not all the nets are equally dangerous. Nets set in deep waters are less likely to catch birds than nets in shallow places or drifting at the surface,” Zydelis says. “Whether a bird species is likely to be caught in fishing nets also depends highly on species foraging behavior and diving habits.”

The birds most likely to be affected by gillnets are those that hunt underwater, such as penguins, loons and cormorants. In particular, the study found that auk species have the highest chances of becoming entangled.

“The highest numbers of seabirds get caught in gillnets set in cold sub-arctic and temperate seas of the northern hemisphere, where very large numbers of diving birds live and rich marine resources attract intensive fisheries.” Zydelis told mongabay.com. “High bycatch occurs in the Russian offshore waters of the northwestern Pacific; possibly a lot of birds get caught around Iceland; the Baltic Sea is another area with high bycatch.”

“But sometimes even low numbers of birds dying in fishing nets could be considered as a significant bycatch when affected bird population are small,” Zydelis added. “Examples could be bycatch of Humboldt penguins in Peru and Chile and bycatch of Magellanic penguins off the southeastern coast of Brazil.”

Humboldt penguins are listed as Vulnerable,” and Magellanic as Near Threatened by the International Union for the Conservation of Nature’s Red List.

Zydelis and other scientists find hope in the restrictions passed by the state of California in the 1980s, a decade after the introduction of monofilament gillnets. In the halibut fishery alone, these nets caught more than 13,000 common guillemots – a seabird native to the Pacific coast. By 2000, central California began enforcing a closure to gillnets greater than 60 fathoms deep. Since then, only one guillemot death has been reported in the same fishery, according to the study.

“Gillnets are very efficient in catching everything that swims by and they are non-selective. This means that when gillnet fishing is intensive, marine resources can be over utilized very fast and in addition nets often cause a lot of unintentional damage,” said Zydelis. “We are especially worried about unintentional mortalities of dolphins, seals, sea turtles and obviously seabirds. They are therefore an integral part of marine ecosystems and play vital functions in complex marine food webs, which evolved over millions of years.”

Seabird migrations can also be problematic to conservation efforts and data-collection.

“This makes conservation efforts very challenging, as this often requires concerted action by many countries and international organizations,” Zydelis says. “Once birds migrate after the breeding season, they can encounter multiple fishing fleets and face other threats, which makes conservation very difficult in practice.”

Scientists have tried a variety of techniques to mitigate bycatch, while inflicting minimum impact on commercial fisheries. A 1999 study experimented with different techniques for saving birds in a Puget Sound salmon fishery. Increasing visibility of gillnets lead to a 45 percent decrease in bycatch, but had little effect on birds during nighttime dives. Although the same study found that acoustic “pingers” reduced bird bycatch by 50 percent, it also found that this method actually increased bycatch of marine mammals and birds on Kodiak Island, who were attracted by the strange sound.

Similarly, replacement of gillnets with longlines in the German Baltic Sea resulted in a three-fold reduction in seaduck bycatch, yet may lead to increased rates of bycatch of other species, mostly seals trying to get at the fish inside. Even with California’s gillnet regulations, a press release by Center for Biological Diversity’s this year estimated that gillnets catch “100 protected whales, dolphins, seals and sea lions each year, as well as thousands of sharks and other non-target fish.”

The most promising solution is what the study terms, “spatiotemporal closures,” or gillnet regulations dependent on specific ecosystems or times of the year. A 2008 study on seasonal closure in Newfoundland and Labrador fisheries provided evidence that this technique could save seabirds.

“Such success can certainly be repeated in other parts of the world,” said Zydelis, “but this always requires the political will to do so and cooperative fisheries, both of which could only appear if there is enough knowledge about the existing environmental problem and enough pressure from the society concerned about unnecessary kills.”