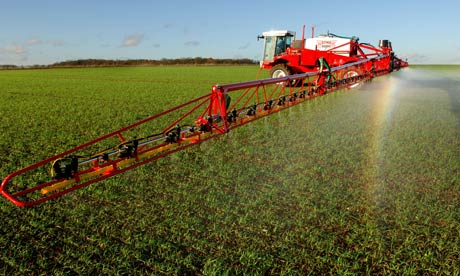 It’s the new DDT: a class of poisons licensed for widespread use before they had been properly tested, which are now ripping the natural world apart. And it’s another demonstration of the old truth that those who do not learn from history are destined to repeat it.

It is only now, when neonicotinoids are already the world’s most widely deployed insecticides, that we are beginning to understand how extensive their impacts are. Just as the manufacturers did for DDT, the corporations which make these toxins claimed that they were harmless to species other than the pests they targeted. Just as they did for DDT, they have threatened people who have raised concerns, published misleading claims and done all they can to bamboozle the public. And, as if to ensure that the story sticks to the old script, some governments have collaborated in this effort. Among the most culpable is the government of the United Kingdom.

As Prof Dave Goulson shows in his review of the impacts of these pesticides, we still know almost nothing about how most lifeforms are affected. But as the evidence has begun to accumulate, scientists have started discovering impacts across a vast range of wildlife.

Neonicotinoids are already known as a major cause of the decline of bees and other pollinators. These pesticides can be applied to the seeds of crops, and they remain in the plant as it grows, killing the insects which eat it. The quantities required to destroy insect life are astonishingly small: by volume these poisons are 10,000 times as powerful as DDT. When honeybees are exposed to just 5 nanogrammes of neonicotinoids, half of them will die. As bees, hoverflies, butterflies, moths, beetles and other pollinators feed from the flowers of treated crops, they are, it seems, able to absorb enough of the pesticide to compromise their survival.

But only a tiny proportion of the neonicotinoids that farmers use enter the pollen or nectar of the flower. Studies conducted so far suggest that only between 1.6% and 20% of the pesticide used for dressing seeds is actually absorbed by the crop: a far lower rate even than when toxins are sprayed onto leaves. Some of the residue blows off as dust, which is likely to wreak havoc among the populations of many species of insects in hedgerows and surrounding habitats. But the great majority – Goulson says “typically more than 90%” – of the pesticide applied to the seeds enters the soil.

In other words, the reality is a world apart from the impression created by the manufacturers, which keep describing the dressing of seeds with pesticides as “precise” and “targeted”.

Neonicotinoids are highly persistent chemicals, lasting (according to the few studies published so far) for up to 19 years in the soil. Because they are persistent, they are likely to accumulate: with every year of application the soil will become more toxic.

What these pesticides do once they are in the soil, no one knows, as sufficient research has not been conducted. But – deadly to all insects and possibly other species at tiny concentrations – they are likely to wipe out a high proportion of the soil fauna. Does this include earthworms? Or the birds and mammals that eat earthworms? Or for that matter, the birds and mammals that eat insects or treated seeds? We don’t yet know enough to say.

This is the story you’ll keep hearing about these pesticides: we have gone into it blind. Our governments have approved their use without the faintest idea of what the consequences are likely to be.

You may have the impression that neonicotinoids have been banned by the European Union. They have not. The use of a few of these pesticides has been suspended for two years, but only for certain purposes. Listening to the legislators, you could be forgiven for believing that the only species which might be affected is honeybees, and the only way in which they can be killed is through the flowers of plants whose seeds were dressed.

But neonicotinoids are also sprayed onto the leaves of a wide variety of crop plants. They are also spread over pastures and parks in granules, in order to kill insects that live in the soil and eat the roots of the grass. These applications, and many others, remain legal in the EU, even though we don’t know how severe the wider impacts are. We do, however, know enough to conclude that they are likely to be bad.

Of course, not all the neonicotinoids entering the soil stay there indefinitely. You’ll be relieved to hear that some of them are washed out, whereupon … ah yes, they end up in groundwater or in the rivers. What happens there? Who knows? Neonicotinoids are not even listed among the substances that must be monitored under the EU’s water framework directive, so we have no clear picture of what their concentrations are in the water that we and many other species use.

But a study conducted in the Netherlands shows that some of the water leaving horticultural areas is so heavily contaminated with these pesticides that it could be used to treat lice. The same study shows that even at much lower concentrations – no greater than the limits set by the EU – the neonicotinoids entering river systems wipe out half the invertebrate species you would expect to find in the water. That’s another way of saying erasing much of the foodweb.

I was prompted to write this article by the horrible news from the River Kennet in southern England: a highly protected ecosystem that is listed among the few dozen true chalk streams on Earth. In July, someone – farmer or householder, no one yet knows – flushed another kind of pesticide, chlorpyrifos, down their sink. The amount was equivalent – in pure form – to two teaspoonsful. It passed through Marlborough sewage works and wiped out most of the invertebrates in 15 miles of the river.

The news hit me like a bereavement. The best job I ever had was working, during a summer vacation from university, as temporary waterkeeper on the section of the Kennet owned by the Sutton estate. The incumbent had died suddenly. It was a difficult job and, for the most part, I made a mess of it.

But I came to know and love that stretch of river, and to marvel at the astonishing profusion of life the clear water contained. Up to my chest in it for much of the day, I immersed myself in the ecology, and spent far more time than I should have done watching watervoles and kingfishers; giant chub fanning their fins in the shade of the trees; great spotted trout so loyal to their posts that they had brushed white the gravel of the river bed beneath their tails; native crayfish; dragonflies; mayflies; caddis larvae; freshwater shrimps and all the other teeming creatures of the benthos.

In the evenings, wanting company and fascinated in equal measure by the protest and the remarkable people it attracted, I would stop at the peace camp outside the gates of the Greenham Common nuclear base. I’ve told the strange story that unfolded during my visits in another post.

After absorbing this news, I remembered the Dutch study, and it struck me that neonicotinoid pesticides are likely, in many places, to be reducing the life of the rivers they enter to a similar extent: not once, but for as long as they are deployed on the surrounding land.

Richard Benyon, the minister supposed to be in charge of protecting wildlife and biodiversity, who happens to own the fishing rights on part of the River Kennet, and to represent a constituency through which it passes, expressed his “anger” about the chlorpyrifos poisoning. Should he not also be expressing his anger at the routine poisoning of rivers by neonicotinoids?

Were he to do so, he would find himself in serious trouble with his boss. Just as they are systematically poisoning our ecosystems, neonicotinoids have also poisoned the policies (admittedly pretty toxic already) of the department supposed to be regulating them. In April, the Observer published a letter sent by the minister in charge of the Department for Environment, Food and Rural Affairs (Defra), Owen Paterson, to Syngenta, which manufactures some of these pesticides. Paterson promised the company that his efforts to prevent its products from being banned “will continue and intensify in the coming days”.

And sure enough, the UK refused to support the temporary bans proposed by the commission both in April and in July, despite the massive petitions and the 80,000 emails on the subject that Paterson received. When Paterson and his department “Deathra” were faced with a choice between the survival of natural world and the profits of the pesticides companies, there was not much doubt about how they would jump. Fortunately they failed.

Their attempt to justify their votes led to one of the most disgraceful episodes in the sorry record of this government. The government’s new chief scientist, Sir Mark Walport, championed a “study” Deathra had commissioned, which purported to show that neonicotinoids do not kill bees. It was not published in a peer-reviewed journal, nor could it be, as any self-respecting scientist, let alone the government’s chief scientist, should have been able to see in a moment that it was complete junk. Among many other problems, the controls were hopelessly contaminated with the pesticide whose impacts the trial was supposed to be testing. The “study” was later ripped apart by the European Food Safety Authority.

But Walport did still worse, making wildly misleading statements about the science, and using scare tactics and emotional blackmail to try to prevent the pesticides from being banned, on behalf of his new masters.

It is hard to emphasise sufficiently the importance of this moment or the dangers it contains: the total failure of the government’s primary source of scientific advice, right at the beginning of his tenure. The chief scientist is not meant to be a toadying boot-licker, but someone who stands up for the facts and the principles of science against political pressure. Walport disgraced his post, betrayed the scientific community and sold the natural world down the river, apparently to please his employers.

Last week, as if to remind us of the extent of the capture of this government by the corporations it is supposed to be regulating, the scientist who led the worthless trials that Walport and Paterson cited as their excuse left the government to take up a new post at … Syngenta. It seems to me that she was, in effect, working for them already.

So here we have a department staggering around like a drunkard with a loaded machine gun, assuring us that “it’sh perfectly shafe.” The people who should be defending the natural world have conspired with the manufacturers of wide-spectrum biocides to permit levels of destruction which we can only guess. In doing so they appear to be engineering another silent spring.

This article was written by George Monbiot for the Guardian UK.

Rising LEUKEMIA CHILDHOOD Cancer rates ,dying off of honey bees , dragonflies ,poisoned fishes? What more will it take until we act??!!

Lessons need to be learnt here on pesticides seems that farmers are taking no notice of the dangers to wildlife with these chemicals.