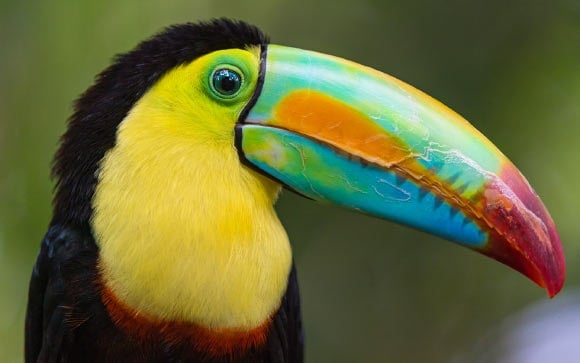 Birds (class Aves) are traditionally thought of as a well-studied group, with more than 95% of their global species diversity estimated to have been described.

Most checklists used by ornithologists as well as by bird watchers say that there are roughly between 9,000 and 10,000 species of birds.

But those numbers are based on what’s known as the ‘biological species concept,’ which defines species in terms of what animals can breed together.

“It’s really an outdated point of view, and it’s a concept that is hardly used in taxonomy outside of birds,” said study lead author Dr. George Barrowclough, an associate curator in the Department of Ornithology at the American Museum of Natural History.

Dr. Barrowclough and co-authors examined a random sample of 200 bird species through the lens of morphology — the study of the physical characteristics like plumage pattern and color, which can be used to highlight birds with separate evolutionary histories.

This method turned up, on average, nearly two different species for each of the 200 birds studied.

This suggests that bird biodiversity is severely underestimated, and is likely closer to 18,000 species worldwide.

The team also surveyed existing genetic studies of birds, which revealed that there could be upwards of 20,000 species.

“We show that avian evolutionary diversity is significantly underestimated due to a taxonomic tradition not found in most other taxonomic groups,” the researchers explained.

“Using a sample of 200 species taken from a list of 9,159 biological species determined primarily by morphological criteria, we applied a diagnostic, evolutionary species concept to a morphological and distributional data set that resulted in an estimate of 18,043 species of birds worldwide, with a 95% confidence interval of 15,845 to 20,470.”

“In a second, independent analysis, we examined intraspecific genetic data from 437 traditional avian species, finding an average of 2.4 evolutionary units per species, which can be considered proxies for phylogenetic species.”

But because the birds in the study were not selected randomly — and, in fact, many were likely chosen because they were already thought to have interesting genetic variation — this could be an overestimate.

“Future taxonomy efforts in ornithology should be based on both methods,” the authors noted.

“It was not our intent to propose new names for each of the more than 600 new species we identified in the research sample,” said co-author Dr. Joel Cracraft, a curator in the American Museum of Natural History’s Department of Ornithology.

“However, our study provides a glimpse of what a future taxonomy should encompass.”

This article was first published by Sci-News.com on 29 Dec 2016.