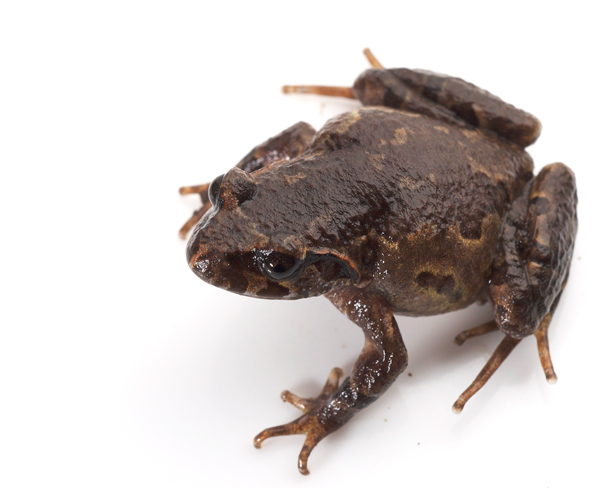 A team of Australian and Vietnamese researchers recently discovered a new species of frog in the high elevations of Vietnam’s Mount Fansipan, according to a new paper in Zootaxa. The amphibian was named Botsford’s leaf-litter frog (Leptolalax botsfordi) as a tribute to Christopher Botsford for his role in amphibian biodiversity research in Asia.

“I had a pretty good idea that the species was undescribed the moment I heard its faint chirp,” Jodi Rowley of the Australian Museum Research Institute told mongabay.com.

One characteristic shared by other Asian leaf-litter frog species is that they make noises similar to insects, but the calls of this new species are unique. While Rowley’s colleagues found many frog species in the stream, Rowley spent hours in the fog filled night sifting through the leaves in one spot trying to find the unknown frog. The moment she finally located the frog, she was filled with a sense of triumph.

The genus Leptolalax is a group of small-bodied frogs whose true biodiversity has only started gaining appreciation in the last five years due to increased exploration and improvements in acoustic and molecular data analysis. Despite being scientifically classified as frogs, they are sometimes referred to as toads due to their bumpy skin. This particular species is more vigorous than other Asian leaf-litter frogs, and has a distinct brownish-pink belly and huge white glands on its thighs.

Although Mount Fansipan hosts many overnight tourists attempting to summit “the roof of Indochina,” relatively little is known about its flora and fauna. Earlier in 2013, scientists in Fansipan described the Sterling’s toothed toad (Oreolalax sterlingae) which, similarly to the Botsford’s leaf-litter frog, is also technically a frog from the Megophryidae family.

Rowley says that she and her colleagues plan to continue working in Vietnam to gather as much information as possible about the amphibians and their conservation status.

“With the discovery of Botsford’s Asian leaf-litter toad, and Sterling’s toothed toad from the same high-elevation stream… it’s clear that the area is important for amphibian conservation,” said Rowley.

Clouds and fog fill Mount Fansipan. Despite being a heavily visited area by tourists, this rough environment has seen little biological research.

This article was written by Andrew Mann for Mongabay.com