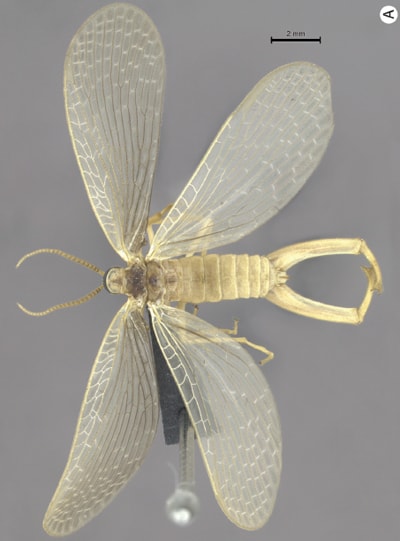 A new species of forcepfly named Austromerope brasiliensis, was recently discovered in Brazil and described in the open access journal Zoo Keys. This is the first discovery of forcepfly in the Neotropics and only the third known worldwide. The forcepfly, often called the earwigfly because the male genital forceps closely resemble the cerci of the common earwig, remains a scientific enigma due to the lack of information on the family.

Forcepflies make up the Meropeida family, which has been around since the world’s continents were combined in a supercontinent Pangea, meaning that the Meropeidae family could be more than two hundred million years old. Even so the new species marks the discovery of only the third extant forcepfly known, one is known from Australia and another from North America.

Little is known about the actual biology of the Meropedia. The forcepfly has broad wings that are capable of fully folding over the abdomen; its body is flattened and its head is “opisthognathous,” meaning that it has retractable jaws. From observations, scientists have concluded that adults are nocturnal and reside primarily on the ground. They are also capable of stridulation, or producing sound by rubbing body parts together like a cricket. In most cases an arthropod will do this when looking for a mate, warning off predators, or marking territory, however scientists don’t yet know why the forcepfly performs stridulation. Even less is known about immature or juvenile stages of the forcepfly, including their appearance.

What can be concluded though is that the world’s rainforest still contain numerous biological surprises. The forest where this species was found, also known as the Mata Atlântica, is more ancient than even the Amazon. Encompassing a multitude of environments from coastal mangrove forests to moist forests, the Mata Atlântica, or the Atlantic Forest, has developed completely unique ecosystems found no-where else largely due to its massive size and distance from the Amazon.

However in the past few centuries the Mata Atlântica has become one of the most threatened tropical forests on the planet, as well as one of the least protected, due to deforestation, plantations, ranching and expanding human populations. The Mata Atlântica has shrunken from 1.2 million square kilometers to less than 100,00 square kilometers today. This change would be equivalent to clearing New York City over sixty three times.

“The discovery of this new relict species is an important signal to reinforce the conservation of Brazilian Atlantic Forest biome. Certainly there are many more mecopterans species yet to be discovered in these forests,” says Renato Machado, lead author of the study with Texas A&M University.