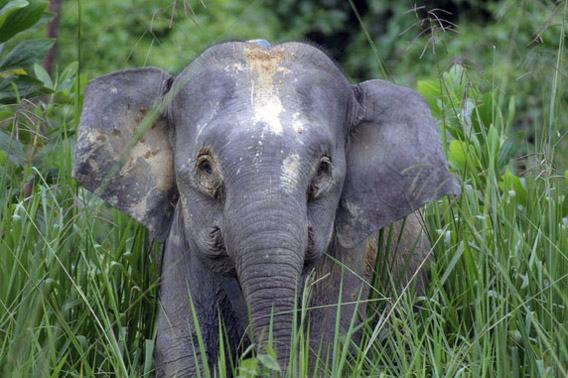 Borneo pygmy elephants (Elephas maximus borneensis) are under threat in Indonesia’s new North Kalimantan province, where their habitat is set to be converted for rubber, jabon and sengon plantations. Experts worry that if the planned conversion goes ahead, the entire elephant population in Indonesian Borneo could be lost.

“The conversion of endangered animal habitat for the development of HTI should not be done,” said Agus Suyitno, a human-elephant conflict mitigation officer with WWF-Indonesia’s East Kalimantan program, in a statement to the media on Feb. 28.

Around 66 percent of the area proposed for conversion by PT BUL and 100 percent of PT IWM’s planned conversion area overlaps with elephant habitat, an analysis from WWF-Indonesia shows.

Agus said he is worried that if the planned conversion goes ahead, it could lead to the loss of Kalimantan’s entire elephant population. He also warned that conversion of elephant habitat would have a negative impact on people living in the area and lead to increased conflicts between local communities and elephants.

“If this area is opened, wild elephants will face a shortage of natural food. As a result, elephants will look for food in human settlements, triggering conflicts,” he said.

Indigenous people in the area also oppose the conversion, concerned about the loss of their customary forest and the well being of the elephant population, which the Dayak Agabag people of Tulin Onsoi consider to be a sacred animal.

“In this area we also have customary forests,” said Ilay, the vice customary chief of the Tulid River area in Tulin Onsoi. “If our forest is opened later nenek will be angry and will certainly come to the village often to eat our crops,” he said, referring to the elephants by the Dayak Agabag name, nenek, which also means grandmother.

Pygmy elephants in Malaysia’s Sabah province have also come under threat recently, where 14 elephants in the Gunung Rara Forest Reserve were found dead of suspected poisoning in January.