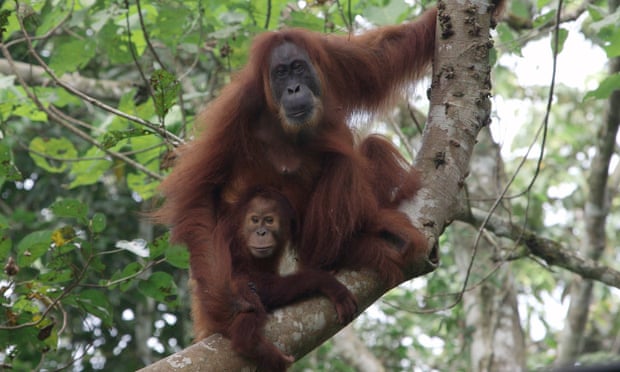 On November 20, 2013, the Sumatran Orangutan Conservation Programme got a call about an injured orangutan found in the mountainous region of Tapanuli.

“He had cuts on his face, on his head, back, hands, and legs,” recalls researcher Matt Nowak. “They even found some air rifle pellets inside his body”—indicating torment and harassment by people. Despite veterinary treatment, the orangutan, named Raya, died eight days later.

But Raya lives on as the representative member of a new orangutan species, Pongo tapanuliensis, or the Tapanuli orangutan—the rarest great ape species on the planet.

The newly identified animal is found only in a single high-elevation forest called Batang Toru—a population that has long puzzled University of Zurich geneticist Michael Krützen, who has been studying the great apes for over a decade.

That’s because the Batang Toru animals are more closely related to their counterparts from Borneo, across the sea, than to other orangutans living on the same island. Until now, science recognized two species of orangutan: The Sumatran and Bornean, both of which are also critically endangered.

“It was always assumed … these guys were Pongo abelii, the Sumatran orangutans,” he says.

Of Ice Ages and Supervolcanoes

Eventually, the scientists teamed up. Krützen’s group sequenced the entire genome of 37 wild orangutans throughout Sumatra and Borneo.

The genetic work suggests that several million years ago, orangutans moved from the South Asian mainland onto what is now Sumatra and occupied an area south of the Toba caldera. Around 3.3 million years ago, a group of them moved north to colonize the area north of Toba. While the two groups did interbreed from time to time, they would remain largely distinct.

New Species of Orangutan Is Rarest Great Ape on Earth

Then, some 600,000 years ago, a second split occurred—this time between the original population south of Toba and the orangutans that went on to settle in Borneo. As ice ages progressed and sea levels changed, orangutans moved effortlessly between landmasses—which explains how the Batang Toru orangutans could be more closely related to those from Borneo.

Around 75,000 years ago, Toba erupted. Perhaps not coincidentally, the genomic data indicates a population crash around 75,000 years ago as well. Because the lava destroyed the surrounding rain forest, the orangutans living on either side of the volcano were permanently separated.

Lastly, University of Southern California graduate student James Askew found that calls made by Batang Toru males vary from calls he recorded elsewhere on Sumatra and on Borneo. Sumatran orangutans produce calls that are long and low-pitch, while those on Borneo belt out calls that are shorter and have a higher pitch. The calls of Batang Toru males were mixed: long, but high-pitch.

“It’s amazing that the deepest genetic split between living orangutans has been overlooked until now,” says Kris Helgen, a mammalogist at the University of Adelaide in Australia.

“The distinctions in skull measurements are really striking, and help make the case for recognizing a new species—even on the basis of only one skeleton,” says Helgen, who wasn’t involved in the new study.

Helgen cautions that the study is just a starting point, and it’s crucial to continue collecting new Batang Toru specimens, when possible, for further analysis.

That’s especially important because fewer than 800 of the great apes remain in Batang Toru, split into three fragmented areas.

“Many overlooked species, like Pongo tapanuliensis, are endangered,” Helgen adds. “It is urgent and crucial to accurately document them and give them scientific names, so they can be recognized as distinctive, studied in greater depth, and protected from extinction.”

This article was first published by National Geographic on 02 Nov 2017. Lead Image Source : While much of the orangutan’s forest habitat is technically protected, illegal logging and uncontrolled burning are continual threats. Photograph: Sumatran Orangutan Conservation/AFP/Getty Images