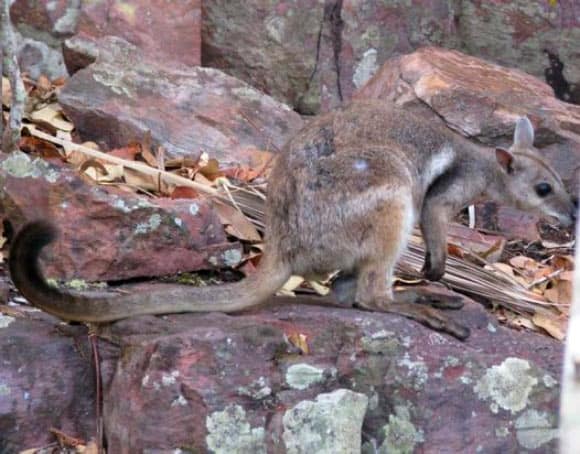 A new cryptic species of rock-wallaby has been described by a team of scientists led by Dr Sally Potter from the Australian Museum Research Institute and the Australian National University.

Rock-wallabies (genus Petrogale) are small to medium-sized marsupials, weighing from 1 to 12 kg.

These animals are only found in mainland Australia and some offshore islands, being absent from Tasmania and New Guinea.

They represent one of the largest groups of extant macropods (kangaroos, wallabies and their relatives) distributed across the country, where they inhabit complex rocky environments such as cliffs, gorges, outcrops and escarpments.

The scientists said that members of the latter population are not only smaller (2.6 – 3.5 kg), but differ in coloration and markings being predominately dark grey/brown, with distinct head and side stripes, as well as brightly colored limbs.

In contrast, the short-eared rock-wallaby from the Kimberley is larger (3.9 – 4.5 kg), lighter and greyer, with much less prominent marking.

“Our study has shown that the Top End and Kimberley rock-wallaby populations are genetically and morphologically distinct and should be regarded as separate species,” said Dr Potter, who is the lead author of a paper published in the Australian Journal of Zoology.

This discovery means there are now 17 known species of rock-wallabies.

The new species is named the Wilkins’ rock-wallaby (Petrogale wilkinsi), after Australian explorer, naturalist and aviator Capt Sir George Hubert Wilkins who, in 1925, collected one of the first specimens in southwestern Arnhem Land. Another common name suggested for Petrogale wilkinsi is the eastern short-eared rock-wallaby.

“Intriguingly, the few individuals available for study from the Victoria River Region of the NT were very pale grey and almost completely lacked any markings. They were also genetically distinct, suggesting they may represent an additional new species. However, more individuals will have to be examined before we can be definitive.”

In the interim, this distinct population has been proposed as a new subspecies of the short-eared rock-wallaby, Petrogale brachyotis victoriae.

This article was first published by Sci-News om 13 Feb 2015.