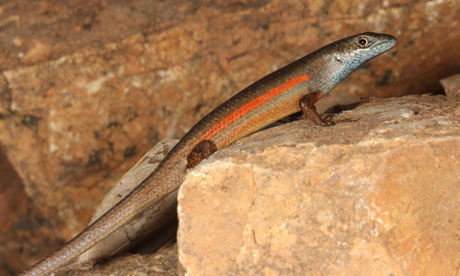 With nearly 400 recorded species, skinks are the largest family of lizards in Australia. They are widespread, common and spectacularly diverse. From snake-like legless species to the heavy-bodied land mullet that can live more than 20 years and reach a length of 70cm, to the six species of blue-tongues with their bizarre, large, blue-coloured tongues that simultaneously warn off would-be predators and attract herpetologists. Thanks to Dr Conrad Hoskin of James Cook University and co-author Patrick Couper of the Queensland Museum, the list of skinks down under is now a bit longer.

Carlia decora, the elegant rainbow skink, was discovered in Queensland, in forested habitats in and near Townsville and Mackay. In fact, the new species is among the most common skinks in Townsville and is a familiar sight to gardeners. The new name is from the Latin decora, meaning beautiful and requires no further etymological explanation. The males’ vivid orange and blue colours say it all. The native habitats for the species includes moist open forests, rainforest margins, and vine thickets in coastal stretches of Queensland receiving high rainfall.

A second species described by the pair was Carlia rubigo, given the common name orange-flanked rainbow skink. A bit more subdued in colour, its males’ blue-coloured heads give way to rusty orange on the body. The orange-flanked rainbow skink occurs in dry and open inland forests of eastern Queensland, encroaching on coastal localities. The species has not been seen in Townsville but occupies surrounding rocky ranges, including Herveys Range, Cape Cleveland and Magnetic Island, where it is said to be the most common lizard.

Herpetologists have seen these species many times before, but both had been lumped together with the widespread species Carlia pectoralis and a fourth species, C inconnexa. The four are consistently differentiated by a combination of colour patterns, morphology, and details of the patterns of their scales in addition to geography and habitat preferences.

The former subspecies, C inconnexa, is endemic to rocky open forests on islands of the Whitsundays. C pectoralis prefers open forested habitat in south-east Queensland and is not so widely distributed as once thought. After straightening out this pectoralis “complex”, Australian species of Carlia now number 22 of which 17 are in Queensland.

Now that the four species are known and identifiable, additional field studies are needed to work out the full extent of each of their geographic ranges. While there is some overlap of distributions, there are also ecological differences that will ultimately help explain both the historical origins and current occurrences of the species.

Teasing apart closely related species provides finer-grained data for conservation purposes as well as making natural history data accessible for each species that was irretrievable when stored under only one name.

This article was written by Quentin Wheeler for the Observer UK.