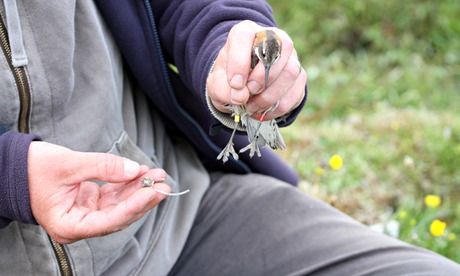 Today sees the launch of the RSPB Centre for Conservation Science – and one of the most exciting areas of research the centre will be involved in is tracking birds and other animals as they migrate, forage and breed.

Last June, at the edge of a small loch on the island of Fetlar in Shetland, RSPB conservationists and members of the local bird-ringing group caught a red-necked phalarope, a dainty, sparrow-sized wading bird. They had caught it exactly one year earlier at the same nesting site, and fitted it with a small rucksack. This was a geolocator, made by the Swiss Ornithological Institute, an electronic tag that records light levels and the time.

It records the time of dawn and dusk every day, relative to a fixed clock, from which you can estimate where the tag was in the world. A geolocator is simple, so it can be small and light enough, at around 0.6g, that a 35g bird can carry it around the world without impediment.

After removing the tag, and letting the unfazed phalarope resume its normal daily routine, the tag was plugged into a computer, the data crunched and the migration routes and wintering area of this bird revealed for the first time.

Did it winter down the road in a quiet Shetland voe? No. Did it go somewhere sensibly close and warm like Spain? No. Clever money was on it ending up in the Arabian Sea, as its Scandinavian neighbours are thought to do. But no. It crossed the Atlantic, headed down the eastern seaboard of the US, crossed the Gulf of Mexico and Panama, and spent the winter bobbing around the food-rich waters south of the Galapagos Islands, and then returned to Shetland in spring, reversing the same route – an amazing 16,000 mile round trip.

New tracking technology is opening up whole new insights into animal behaviour, movements and migrations. It’s an amazing time to be a conservation biologist.

The key is miniaturisation – making the location recording devices, electronic memory, power sources and attachment methods smaller and lighter. In the 1970s, radio-tracking animals was possible, but only with a device the size of small shed. Fine if you were studying moose or bears, but not phalaropes.

Now, tags as light as 5g can communicate the position of their bearer via satellites, without the biologist ever having to leave to leave their desk. Satellite tags have helped RSPB, BirdLife International and others reveal where albatrosses come into contact with long-line fishing boats in the southern oceans and risk getting caught on their baited hooks and drowned.

Satellite tags have shown us where the rare and beautiful sociable lapwing spends the rest of the year when not nesting on the Khazakh steppe (some in Sudan, some in India, some in Oman). It has also revealed important sites where they stop for a breather on migration.

At one of these previously unknown avian service stations in south-east Turkey, a flock of 3,200 sociable lapwings was discovered; at the time more than was thought to be the entire world population. It has also shown how they are putting themselves in harm’s way by passing through areas of the Middle East, where there is high hunting pressure.

Tags can also tell us what an animal is up to. Heart rates and body temperature can be measured, accelerometers can detect flapping flight in birds, contact with water can be detected, underwater dive depth and duration can be measured. In the very near future, wildlife tags will be able to swap data, send SMS texts to you, and take video of their location as the animal goes – in fact birdcams are already here.

As well as revealing amazing feats of animal endurance and behaviour, tracking technology is revealing pinch points and key threats to our wildlife. So the sooner we can learn more about how animals move around their territory, or around the globe, the better.

This article was written by Guy Anderson for the Guardian.