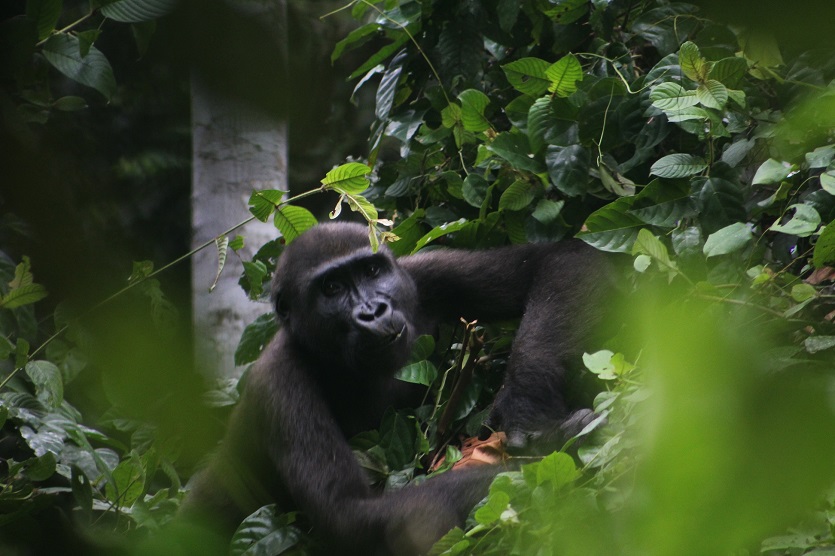 KRIBI, Cameroon — Alarm flashed through Cameroon’s conservation community in mid-September, when images of untidy rows of black polythene bags in a freshly bulldozed gash in the rainforest made the rounds of social media.

It was soon confirmed that the pictures came from a forest concession adjacent to Campo Ma’an National Park, in the south of the country. A little-known company, Camvert, intends to convert 60,000 hectares (148,000 acres) of forest here into oil palm plantations.

There had been warnings. On May 15, Cameroon’s Ministry of Forestry and Wildlife announced its intent to reclassify nearly three-quarters of this logging concession, known as FMU 09-025, for industrial agricultural production.

But legally, this announcement should have been followed by public consultations, an environmental and social impact assessment, and then, after any objections had been addressed, formalized by a decree from the prime minister’s office.

Community leaders and NGOs have challenged the reclassification of this important tract of forest. The concession sits to the south of areas of intense deforestation for existing palm and rubber plantations owned and operated by agro industry giants Socapalm and Hevecam.

To the west, it shares a 50-kilometer (31-mile) boundary with Campo Ma’an National Park, which is home to 26 species of medium and large mammals, including elephants, buffalos, great apes, panthers and pangolins.

Between 2005 and 2016, FMU 09-025 was run by the Dutch logger Wijma. According to NGOs, it was an example of sustainable management practices, earning certification by the Forest Stewardship Council (FSC) as “well-managed.”

“FSC standards for sustainable forest management are way higher than the government standards. One can therefore say that this is one of the best managed logging concessions in Cameroon,” says Aristide Chacgom, an environmental campaigner and coordinator of the NGO Green Development Advocates (GDA).

Wijma’s selective logging left most of the forest in the concession standing, leaving it to serve as a carbon sink, a corridor for wildlife, and a buffer zone for conservation in the adjacent national park, which includes a promising gorilla habituation project on an island called Dipikar.

The forest is also a cultural asset and spiritual sanctuary for the Bagyeli indigenous peoples. Under Wijma, locals could still enjoy wild nuts, game, fish, medicinal plants, and a range of livelihood services.

Community leaders have warned during public consultations that if the concession goes into agricultural production, they would lose access to the land and its livelihood services. In the north, where Socapalm and Hevecam have operated industrial-scale plantations for more than three decades, poverty has deepened as land became scarce.

Converting this bloc of forest into oil palm plantations is the least sustainable land use option for the area, says John Takang, executive director of the NGO Environmental Governance Institute (EGI). “Industrial agriculture will take away land from local communities, deprive them of forest-based livelihood services and eventually lead to deeper impoverishment.”

He adds that communities that have experienced the fallout from Hevecam’s and Socapalm’s operations for more than 40 years and stand to lose more land to Camvert’s plantation have overwhelmingly rejected the plan. “But in places like Campo, where there is little or no social infrastructure, the people are more receptive, hoping it will bring jobs and development. Their areas have no experience of agroindustry and its negative impacts,” Takang says.

Reclassifying FMU 09-025 for agricultural production will advance the expanse of monoculture plantations across the south of Cameroon to within several kilometers of the protected forest of Campo Ma’an. Additionally, a declaration published by local NGOs argued that the plan would reduce Cameroon’s forest cover, in conflict with government’s stated goal to increase permanent forest cover to 30 percent of the national territory.

It will also undermine commitments to promote agricultural sustainability, notably under theAfrican Palm Oil Initiative(APOI) which seeks to “transition the palm oil sector in West and Central Africa to become a sustainable driver of long-term, low-carbon development in a way that is socially beneficial and protects the tropical forests of the region.”

Chacgom told Mongabay that according to briefings he has seen, Camvert intends to slash all 60,000 hectares of the reclassified forest, at a rate of 2,000 hectares (4,900 acres) per year.

Little is known about the company, a newcomer in the agroindustry sector; employees say that it is owned 100 percent by Cameroonian interests. “They have no experience running an oil palm plantation anywhere,” says Chacgom, citing conversations with Camvert representatives. “The company plans to learn as they go.”

The discovery that Camvert has begun clearing forest and establishing a nursery leads NGOs to fear the public consultation and legally mandated review process are rigged.

“These are critical stages to the establishment of a palm plantation,” says Takang. “A nursery means they are confident they would get a go-ahead.”

Even if public objections were overruled and an environmental and social impact assessment supported reclassification, a concession for a parcel of land this size would still have to be issued by the president’s office.

The Camvert story is one that’s played out before, says Chacgom. “What is happening is very similar to what happened with Herakles Farms in the South West region. The forestry law is being violated and the public’s concerns are being ignored.”

Ten years ago, U.S.-registered Herakles attempted to clear 70,000 hectares (173,000 acres) of forestover the objections of local communities, claiming the forest was already substantially degraded. Sustained resistance by locals supported by biologists and international NGOs brought to light both the ecological value of the forest and the absence of the necessary consent from those relying on it for their livelihoods and culture. The company abandoned its claim in 2013.

NGOs and communities hope their campaign will similarly force the authorities to drop the plan reclassify FMU 09-025 and block Camvert’s plans.

“There are better options,” Takang says.

“For example, the government could transform the concession into a community forest, so that villagers can continue to draw livelihood services. Or, we think it can be added to Campo Ma’an National Park to continue serving as a migratory route for wildlife.

“Setting the land aside for agricultural production should be the last option if it must be declassified.”

This article by Eugene N. Nforngwa was first published on Mongabay.com on 25 December 2019.