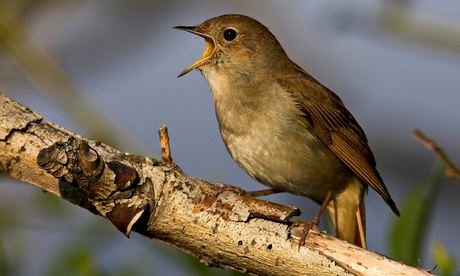 No wonder they celebrated it in a song. The common nightingale is top of the feathered crooners, according to research highlighted on International Dawn Chorus Day that suggests the bird’s impressive vocal range is down to the composition of its brain.

The secretive bird, immortalised in the romantic 30s song A Nightingale Sang in Berkeley Square, produces far more notes in its birdsong than other species, according to research carried out at the University of Bath and Cornell University.

Species with larger brain areas that were capable of producing a higher repertoire of syllables included the common blackbird (108 syllables) and the Eurasian skylark (341 syllables). But their enthusiastic efforts are dwarfed by those of the common nightingale – a visitor to the UK from April to June – which has a repertoire of 1,160 syllables.

Species whose lower brain areas were larger relative to their higher brain areas, and can produce only a handful of syllables or notes in their songs, include the tree pipit, the sand martin and the yellowhammer.

The findings, first published in the Proceedings of the National Academy of Sciences USA, are the first evidence that the capacity for learning in birds is closely related to brain structure, as opposed to overall brain size.

“This research is not only an extremely complex and interesting study of songbirds, it also gives us a unique insight into how brain development may contribute to human linguistic capabilities,” said Prof Tamas Szekely of the Biodiversity Lab at the University of Bath’s department of biology and biochemistry.

“The research gives us an example of the neural biology involved in language learning. It is possible to draw parallels between the ways in which bird brains have developed to learn complex songs and the way human brains have evolved to allow language.”

Neuroscientists have found that humans are able to speak and to set and achieve complex goals because of the prolonged development of higher brain areas, such as the cortex and the frontal cortex in particular.

These areas of the brain responsible for language are the last to mature and do not fully develop until humans are in their early 20s. In those bird species that have greater capacity for song learning, it is likely that their higher brain areas were built up over their lower brain areas as a result of sexual selection. Put simply, females prefer to mate with males that have more elaborate songs.

This article was written by  Jamie Doward and Amy Moore for the Guardian.