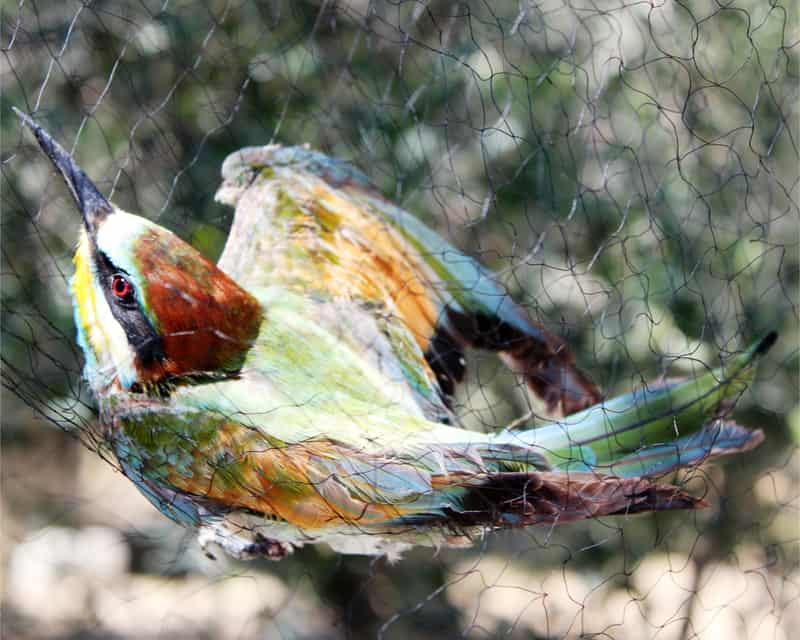 The Committee Against Bird Slaughter (CABS) and Friends of the Earth (FoE) Cyprus have now released the report on their bird protection camp during the peak of bird migration in autumn 2011. In just over one week, two CABS teams located 3,817 limesticks, 23 mist nets and 32 electronic decoys in the main Trapping hotspot in Famagusta District. This contrasts sharply with the comparatively weak efforts of the law enforcement agencies in this critical area, where the pressure on migratory birds through illegal trapping is at its greatest. The report highlights four important issues.

The first, and most important, is the extent of illegal bird trapping. The field monitoring teams were unable to report an improvement in the overall situation in the major trapping hotspot of the Republic of Cyprus, the Famagusta district. Limesticks were set out in almost every suitable location in the core area between Ayia Napa and Paralimni, while the number of illegal mist nets and electronic decoys were significantly higher, throughout the whole Famagusta district, than in spring. Due to inadequate response by the law enforcement agencies, and in order to save protected birds – the majority of them not target species for the trappers – CABS teams located, reported and dismantled a total of 3,817 limesticks, 23 mist nets and 32 electronic decoys in areas open to the public only, over a period of just eight days. They subsequently provided the Cyprus Police and the Game Fund with all trapping data collated in their comprehensive data bank for further investigation and action.

The Game Fund and the Anti-Poaching Squad of the Cyprus Police have considerably improved their efforts to combat illegal bird trapping problem. Nonetheless, the report clearly shows that the official anti-trapping effort in the area east of Larnaca, including the British Sovereign Base Area of Dekeleia and the non-occupied area of Famagusta district was markedly less in comparison to other affected areas. This conclusion is based on all available official data and operational results of the responsible law enforcement agencies for the period between August and December 2011. It is hard to justify this bias in effort on operational grounds; it can only be concluded that political factors play a role in this case.

Practical cooperation in the field with the responsible law enforcement agencies was very limited. This is disappointing, as closer cooperation would have resulted in more prosecutions of poachers and official seizure of trapping equipment, as well as deterring aggression towards conservationists.

The safety of volunteers continues to give us grave cause for concern. The volunteers were forced to avoid particularly dangerous public areas, which gave the impression that criminal elements have established ‘no go’ areas where the rule of law is suspended for illegal bird trapping activities.

Delegates to the Council of Europe and Bern Convention ‘European Conference on Illegal Killing of Birds’ hosted in July 2011 by the Cyprus Government unanimously called for a policy of zero tolerance towards illegal bird trapping with more effective action by the authorities. It is hoped that efforts will be stepped up significantly, not least during the Cypriot presidency of the European Union in the second half of 2012. Close professional cooperation between conservation NGOs organisations and the law enforcement agencies of the Republic of Cyprus will be of long-term benefit to both parties. This is repeatedly the case in other European Union countries.

The CABS/FoE Cyprus report has been circulated to various European Union and Commission agencies, diplomatic representatives in Cyprus of EU states, as well as to the responsible ministries and law enforcement agencies of the Republic of Cyprus

We are far from being deterred in their aims to monitor and expose illegal bird killing, and intend to conduct bird protection camps in the Republic of Cyprus in both spring and autumn this year.

This article was written and published by the Committee Against Bird Slaughter (CABS) and Friends of the Earth (FoE) Cyprus.