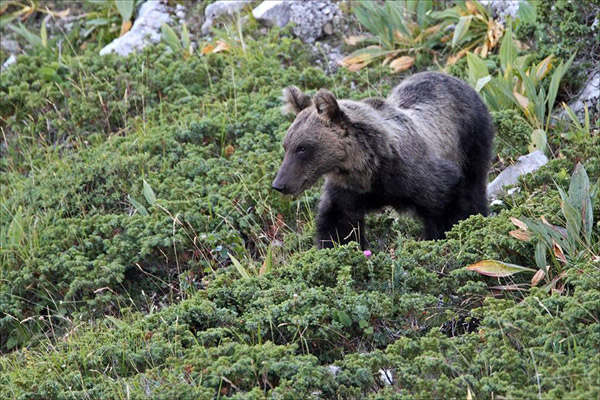 The Marsican brown bear is on the brink of extinction. Despite authorities spending millions of Euros on its conservation, high human-caused mortality is menacing the survival of this distinct subspecies. The Marsican brown bear (Ursus arctos marsicanus) is only found in the Italy’s Central Apennines, less than 200 kilometers from Rome. The last reliable research carried out in 2011 by the University La Sapienza in Rome estimated a population of around 49 bears. Not surprisingly, the Marsican bear is at extremely high risk of extinction and is considered Critically Endangered on the Red List of the IUCN (International Union for Conservation of Nature).

Researches stated that bear’s high mortality rate is unacceptable and remains the biggest obstacle to the survival of the population. Poachers and collisions with cars are the biggest killers of Marsican bears, though for half of the deaths we do not have a definite diagnosis.

During the period of 1971 to 2013, 93 bears died. In the 1980s bears were mostly killed by poachers; in the 1990s most bears died as result of car accidents; and from 2000 on most deaths have been caused by poisoning. Two bears, an adult female and a yearling male were poisoned in 2003; three—an adult female, an adult male, and a subadult male – were poisoned in 2007 together with five wolves and eighteen wild boars. No one was found guilty for these crimes.

Another attempt to poison the remaining population of Marsican bears took place only this year: in May thirty poisoned baits were found in the heart of the Park. Two foxes, one wolf, and maybe a golden eagle died from the poisoning. In the aftermath of the discovery, specialized teams from the Forest Service destroyed the poisoned baits and no bear was killed.

Nevertheless, mortalities continue. In April a bear died in a collision with a car after climbing a fence on the highway. In June, a bear nicknamed “Stefano” was found dead but investigations on this death are still ongoing. Though the first results excluded mortality by poisoning or shooting, the medical necropsy uncovered four bullets in the bear’s body, but they are not considered the primary cause of death.

The bears are also threatened by disease that can be transmitted by livestock, wild animals and especially stray dogs. In January twelve wolves were found dead, some of them due to canine distemper. A few months later, over 30 wolves died mainly for the same plague, along with hundreds of dogs and stray dogs. A vaccination campaign has been launched covering Abruzzo and Molise regions in order to restrain the plague, which also poses a threat to the Marsican bear.

Furthermore, vets have found other diseases like tuberculosis and clostridium in cattle in the National Park of Abruzzo, Lazio, and Molise.

Researchers from La Sapienza highlighted in a paper paper published in 2008, that the “development of a new strategic approach to overcome the traditional division among authorities and to coordinate all conservation efforts” is needed to save bear’s population. At the time, an interagency commitment called PATOM, (Action Plan for the Conservation of the Apennine Brown Bear) was signed by 24 administrations—including all national, regional and provincial administrations – and NGOs involved in Apennine brown bear conservation. The Plan aims at coordinating all the institutions involved in the management of Marsican bear conservation.

At the present time, however, the PATOM objectives’ deadlines have expired, and no information on the achievements of this agreement is available to the public.

However, a new conservation project dubbed Life Arctos, funded by the EU Life Program, started in 2011 and is due to finish in 2014. Life Arctos is undertaking various actions, many of which were outlined in PATOM, including: interventions for livestock husbandry more compatible with the presence of the bear; reduction of conflicts arising from human activities; management of Marsican bear natural resources; campaigns to spread information and raise awareness; as well as educational activities. While these initiatives are expected to be monitored on the website, at the moment only technical reports have been published.

If they are to survive Marsican bears need to spread into other protected areas in the central Apennines, according to experts. For this to happen, authorities must create functional wildlife corridors.

However, even as experts suggest creating more room for the vanishing bears, the Abruzzo Region local government is discussing reducing the borders for Sirente Velino Regional Park. Experts have identified this park as a possible target for bear expansion, but unfortunately it is also attractive for hunters and luxury development. Despite warnings from NGOs and the park’s staff, the regional government, which signed the PATOM years ago, continues to push the project. According to a local newspaper, Il Centro the Russian company Gazprom has proposed to build a large ski resort in an area once-frequented by the Marsican bear, wiping out forever the possibility of Italy’s bear returning to these mountainsides.

This article was written by Federica Di Leonardo for Mongabay.com

As I have often stated in comments regarding the threat to endangered species, particularly where environmental changes wrought by man through development or poaching, it is essential that viable DNA specimens from the dead bears are taken and preserved, so that future genetic diversity of this bear population can be restored once other detrimental factors are neutralized.