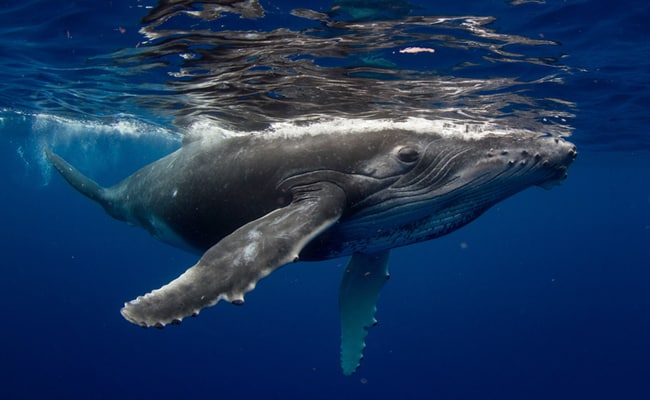 Humpback whales have become well-known for their beautiful songs, but researchers have found that noise coming from ships is enough to make them shorten their songs, or stop singing altogether.

While ocean noise has become a growing concern that’s expected to increasingly impact marine life, scientists from Ogasawara Whale Watching Association and Hokkaido University in Japan wanted to see how noise from cargo ships was affecting humpback whales living around the Ogasawara Islands.

They set up underwater microphones in the area, and identified one to three singers per day and 26 singers in total. They concluded in a study just published in the journal PLOS One that these whales’ behavior changed when ships were present and they either stopped singing altogether, or shortened their songs whenever a ship approached, and they did this even when ships were almost a mile away. They also found that most of them didn’t start singing again for at least 30 minutes after ships had passed.

Because only male humpbacks sing, their work didn’t look at how females and calves are being affected, but it’s hard to imagine they’re not being impacted.

“It’s one more bit of evidence confirming that the noise humans make has a negative impact on all sorts of aspects of the life of marine mammals,” Spencer Fire, assistant professor in Florida Tech’s Department of Ocean Engineering and Marine Sciences, told CNN.

Although he wasn’t involved in the study, he added that the findings were important because hard data can be used to change policies that would protect marine mammals from noise that negatively impacts them by changing their behavior, disturbing them, causing them to use too much energy, or forcing them into quieter areas where they may not find enough food.

Conservationists recently addressed the issue at a summit held by the International Maritime Organization, where almost a dozen organizations called for slowing ship speeds to reduce noise.

“Underwater noise from ships increases levels of stress-related hormones in whales, which can impact their ability to reproduce and impair their immune systems,” Regina Asmutis-Silvia, executive director of Whale and Dolphin Conservation, told the Independent. “Because whales and dolphins are highly dependent on sound to communicate, navigate, socialise, and locate prey, a noisy ocean is one in which their field of ‘vision’ shrinks, requiring whales to increase the amplitudes of their calls.”

Not only would slowing ships down make the ocean quieter for marine mammals, and reduce their stress levels, it would have the added benefits of reducing the risk of ship strikes and reducing greenhouse gas emissions.

Hopefully this study will contribute to further changes being made to protect humpback whales and other marine life from threat of ocean noise.