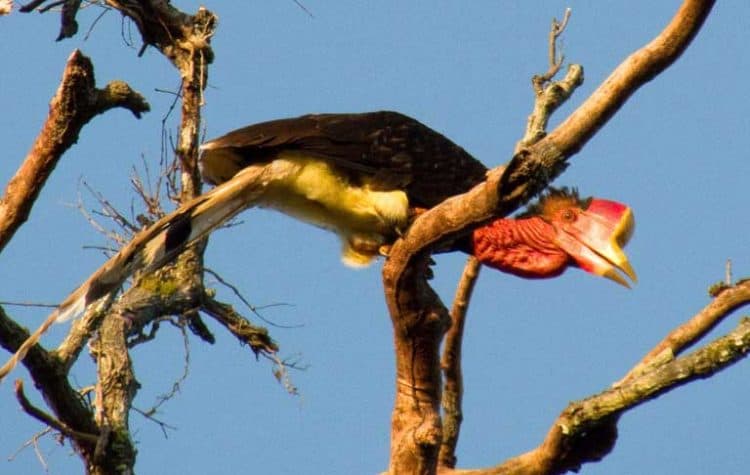 JAKARTA — Conservationists have underestimated the combined impact of deforestation and capture when assessing the threat to Southeast Asia’s bird populations — a one-two punch that a new report warns could lead to the extinction of dozens of species by the end of this century.

Focusing on 308 forest-dependent bird species in the Sundaland subcontinent, a biodiversity hotspot encompassing most of Southeast Asia, researchers from the National University of Singapore (NUS) and the University of Sheffield in the U.K. discovered that the loss of forest habitat, coupled with hunting or poaching, resulted in a “much higher average population loss” than when accounted for separately.

The report, publishedOct. 5 in the journal Nature, suggested that the population status of 51 species affected by the combined threat should be uplisted to “vulnerable,” “endangered,” and “critically endangered.” Only 27 of the 308 species studied are currently included in these threatened categories in the IUCN Red List.

“Recent extinctions like the passenger pigeon and the dodo present common traits like the simultaneous combination of habitat loss and active hunting,” William Symes, a Ph.D. graduate from the NUS and lead author of the report, said in a statement.

The study showed that from 2000 and 2015 nearly nine out of 10 of the bird species studied had experienced an average habitat loss of 16 percent due to deforestation. Meanwhile, 77 species particularly prone to exploitation — either captured for the pet trade or hunted for their body parts — experienced an average population decline of 37 percent.

When these threats were combined, the researchers found that the decline in population was estimated to be almost 24 percent for all 308 species, and nearly 52 percent for the 77 commercially valuable birds.

The researchers noted that they excluded other threats such as logging, whose impact on many species remains unknown. However, these threats could “likely cause substantial reductions in some species.”

“Many researchers have focused on quantifying the impacts of deforestation on threats to birds and other taxa,” David Edwards, a conservation scientist at the University of Sheffield and co-author of the report, told Mongabay in an email.

“However, wildlife trade is the other major extinction risk, so we identified trying to quantify these impacts in addition to those from deforestation as a key knowledge gap,” he said.

Edwards said that failing to account for these combined threats could lead to a major underestimation of threats in the IUCN Red List assessments.

While the IUCN typically tracks different threats to wildlife separately, some threats are interconnected, and their combined impact can be more severe than what is currently estimated, the researchers wrote.

The study projected that up to 90 of the species studied, including the ruby-throated bulbul (Pycnonotus dispar) and white-crowned hornbill (Berenicornis comatus), might go extinct by 2100.

The researchers called for “urgent” policy intervention to curb deforestation and stem the pet trade, otherwise “many species are likely to be lost.”

“This fatal combination of ingredients is present for dozens of unique bird species in Sundaland. At current rates, vanishing forests and enormous trapping pressures are likely to drive many of them to extinction in the near future,” Symes said.

The combined impacts of deforestation and commercial exploitation are not unique to Southeast Asia, the researchers said. Rampant land-use change and wildlife trade are also known key drivers of the decline in birds such as parrots in Latin America and Africa.

“Our technique of evaluating the combined threats can be applied to other tropical forests facing similar threats, to facilitate the development of effective conservation policies,” said study co-author L. Roman Carrasco, an assistant professor at the NUS.

“Coordinated efforts to curb commercial exploitation and slow deforestation, for instance, can limit the extinction of bird species,” Carrasco added.

The vanishing of some bird species in the wild would significantly impact biodiversity and also subsequently the society at large, Edwards said. “There are several arguments for conserving biodiversity, from a moral imperative to the generation of key ecosystem services like pollination, predator control and ecotourism,” he said.

This article by Basten Gokkon was first published on Mongabay.com on 16 Oct 2018.