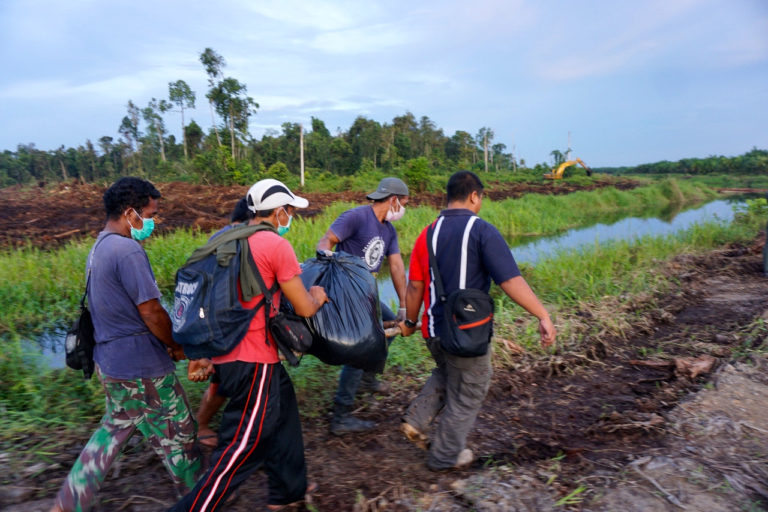 PANGKALAN BUN, Indonesia — Authorities in Indonesia are investigating the killing of a rare orangutan whose body was found riddled with bullet and knife wounds in an oil palm plantation with a history of orangutan deaths.

Workers at the plantation in Seruyan district, in the Bornean province of Central Kalimantan, pulled the badly decomposed corpse of the male Bornean orangutan (Pongo pygmaeus) from a canal at the site on July 1.

They reported the discovery to officials from the nearby Tanjung Puting National Park, who then sent a team to check on the body along with representatives from the provincial conservation agency and the NGO Orangutan Foundation International (OFI).

A microchip implant in the orangutan’s body identified him as Baen, a male about 20 years of age who was released into Tanjung Puting by OFI on Sept. 23, 2014, according to Fajar Dewanto, a field director at OFI.

Fajar, who helped identify the body, said Baen had previously been captured from the very same plantation in which he was found dead. The plantation is run by PT Wana Sawit Subur Lestari II (WSSL II), a subsidiary of major palm oil producer Best Agro Plantation.

Fajar said OFI had previously worked with the company to train its employees on how to deal with orangutans inside the plantation, following a string of orangutan deaths in the area. Baen’s death brings to five the number of orangutans found dead in the plantation. No one has been held accountable for any of the earlier deaths, despite orangutans being a protected species under Indonesian law.

Ramli Tamba, an official from WSSL II, told Mongabay in a text message that the company was making “efforts to rescue and protect all wild animals” in its concession. He referred all questions about the series of orangutan deaths, including the latest one, to the provincial conservation agency.

The results of a preliminary examination of Baen’s body found extensive injuries. These included at least seven wounds from airgun pellets, a fractured arm, a severed finger, and deep lacerations all over the body, likely from some kind of bladed weapon. Abrasions around the animal’s ankle indicated it had also been tied up at some point.

Fajar said it appeared that whoever killed the orangutan threw the body into the canal to conceal the crime. The water would have hastened its decomposition, he said, and scavengers like monitor lizards would have eaten the flesh.

Baen’s death marks the latest killing of an orangutan in Indonesian Borneo this month, all involving the use of airguns. In February, police charged four men with killing an orangutan in East Kalimantan province. The suspects admitted to shooting the animal 130 times with an airgun, claiming it had encroached onto their pineapple farm and ruined their crop.

In January, police charged two rubber farmers with the gruesome shooting and decapitation of an orangutan in Central Kalimantan province. The orangutan had been shot 17 times with an airgun.

A recent study suggests the killing of the great apes is a key factor in the loss of nearly 150,000 Bornean orangutans between 1999 and 2015, alongside deforestation and forest clearing for industrial plantations.

The species is listed by the IUCN as critically endangered, or on the verge of vanishing from the wild. The main threats to its survival are hunting and loss of habitat as forests across Borneo are razed to make way for monoculture plantations and mines; as well as poaching for the illegal pet trade. The district of Seruyan, where Baen was killed, is a textbook case of a district taken over by the palm oil industry, aided and abetted by the former district chief.

Orangutans are ostensibly protected by law, but lax enforcement means few perpetrators ever face justice for killing or trading in these great apes.