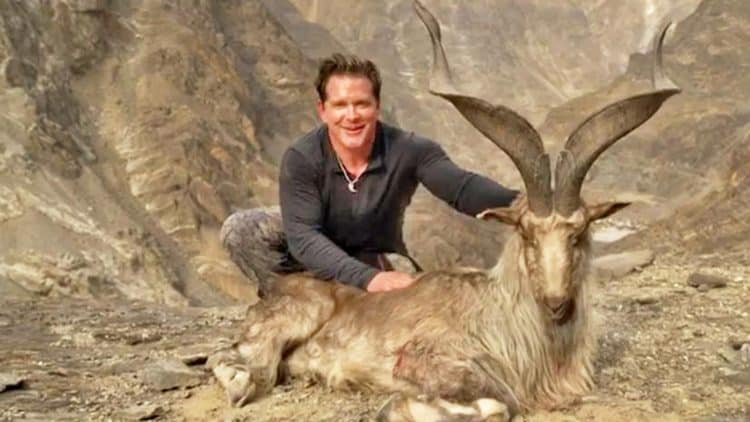 An American man reportedly shelled out $110,000 to hunt and kill a rare mountain goat while on a recent expedition trip in Pakistan’s northern Himalayan region of Gilgit-Baltistan..

Bryan Kinsel Harlan, a trophy hunter from Texas, was photographed on Tuesday kneeling and smiling behind the butchered goat.

“It was an easy and close shot,” Mr Harlan told the Pakistani press. “I am pleased to take this trophy.”

The local press identified the goat Mr Harlan killed as a wild Astore markhor by Pakistani newspapers. It is the official national animal of Pakistan.

Mr Harlan’s photo prompted outrage on social media, many from people who are angered by the lack of laws banning—or regulating—the practice of hunting markhors. The Texan hunter is the third American to travel to Pakistan and kill a markhor.

Despite the swift backlash, Mr Harlan seems to have enjoyed his exotic adventure and postured himself as someone involved with animal conservation efforts.

The video footage of Mr Harlan’s hunting experience shows him climbing a cliff and shooting a male marcher sitting next to a young goat before high-firing his local guides.

Another video features Mr Harlan expressing his gratitude in being “welcomed with open arms” and called Pakistan a safe destination for tourists, and urged fellow Americans to follow his footsteps.

US citizen #BryanHarlan who hunted an AstoreMarkhor few days ago at GB has said that Pakistan is more peaceful country than Mexico. if govt of Pak govt could put some investment in to tourism sector they could do great for this beautiful country.
Thank you #BryanKinselHarlan pic.twitter.com/91rd3rjghZ

“This is a perfect example of hunters and villagers coming together for a common goal of game conservation,” he said.

Pakistani authorities told the Washington Post that, in the past month, only hunters—like Mr Harlan—who have paid large amounts of money are permitted to hunt markhors in the northern parts of its country as part of its efforts to protect the endangered species from potential extinction.

The markhor population have reportedly been diminishing in the past several years, mainly due to deforestation, military activities, local poaching, and unregulated trophy hunting among other causes.

US citizen #BryanHarlan who hunted an AstoreMarkhor few days ago at GB has said that Pakistan is more peaceful country than Mexico. if govt of Pak govt could put some investment in to tourism sector they could do great for this beautiful country.
Thank you #BryanKinselHarlan pic.twitter.com/91rd3rjghZ

Pakistani authorities have attempted to make strides to protect the markhors from facing extinctions, including allocating five sanctuaries in India for the rare mountain goats to roam freely and breed.

The South Asian country also banned all hunting from local poachers with the exception of foreign hunters. Foreign hunters are only permitted to hunt 12 male goats in “community conservation areas.”

About 80 per cent of the profits the Pakistani authorities made from foreign hunters are reportedly given to “isolated residents” who live in the goats’ habitat, and the other 20 per cent are allocated to the government wildlife agencies.

In 2015, the International Union for the Conservation of Nature changed the classification for the markhor population from “endangered species” to “near-threatened.”

This article was first published by The Independent on 12 Feb 2019.