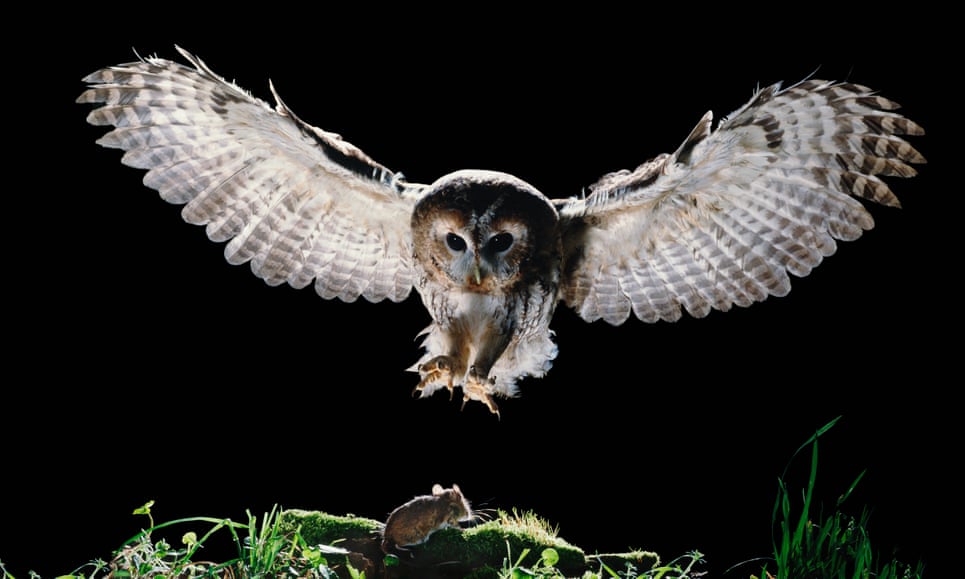 Owls are equipped with highly developed stealth technology that helps them swoop on prey undetected, a study has shown.

The nocturnal hunters have feathers that absorb aerodynamic sound and suppress the vibrations that occur when a bird beats its wings.

During flight, an owl’s feathers extract mechanical energy and convert it into heat. The result is perfect silence as it approaches a mouse, vole or other prey.

Scientists used lasers and high-speed cameras to analyse and compare long-eared owl, eagle and pigeon feathers during flight. While differing in size, all three birds have a similar wingbeat style.

Professor Jinkui Chu of Dalian University of Technology in China, led the research. He said: “Many owls have a unique and fascinating ability to fly so silently that they are out of their prey’s hearing range, due to their feather structure.

“This behaviour has long been of interest to engineers, as we seek to apply the owl’s noise-reduction mechanisms to other purposes and situations that benefit society.

“Now, however, we know the owls’ silent flight ability is even more superior than we thought. You could say of all birds it is the king of acoustic stealth. It not only manages to suppress aerodynamic noise when gliding, but also mechanical noise caused by vibration during flying.

“This is remarkable, considering the sudden jumping, bending and twisting the wings are subjected to when flapping and the noise that creates for other birds.

“In the scientific world, the process used to eliminate this mechanical noise is called ‘damping’, which means the extraction of mechanical energy from a vibrating system usually by converting it into heat and allowing it to remain steady.

“Our research showed the long-eared owl has superior damping skill, meaning it can remain mind-blowingly stable and eliminate mechanical noise caused by the movement of its feathers – quite a feat of engineering.”

He added: “This study will hopefully provide further insight into the owls’ silent flight mechanism and help engineers develop ideas for special materials or structures, such as on-shore wind turbines, where similar noise elimination can be applied.”

The research is published in the Institution of Civil Engineers’ journal Bioinspired, Biomimetic and Nanobiomaterials.

This article was first published by The Guardian on 17 Aug 2015.

A tree falling anywhere will still make its tree-falling noise whether or not you are there to hear it…but an owl will fly in silence even if your hearing is a sharp as a …MOUSE! 🙂