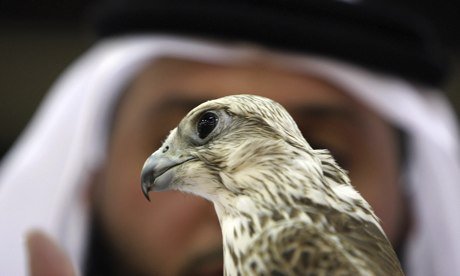 Pakistan is witnessing a mounting backlash against Arab sheikhs who spend part of their winters hunting a rare bird that conservationists warn is at risk of extinction. Activists in the country say they are determined to end the annual killing of houbara bustards, an elusive bird that migrates each winter from central Asia to Pakistan’s warmer climes.

Although the birds are officially protected, VIP visitors from the Gulf enjoy their traditional hunts with falcons and believe the houbara’s meat has aphrodisiac properties.

“Is there any more ridiculous reason to kill an animal?” said Naeem Sadiq, a Karachi-based activist who petitioned the Lahore high court to ban the practice. “If it’s illegal for Pakistanis to kill these birds why should the Arab sheikhs be allowed to do it?”

On Friday, the court slapped an interim ban on hunting in Punjab province, where the government has issued special hunting permits to royalty from across the Arab world.

Numbers of houbara, which are considered to be at risk of extinction by the Convention on International Trade in Endangered Species, have fallen dramatically in recent decades.

They have been almost wiped out on the Arabian peninsula and various countries in the region, including the United Arab Emirates (UAE) and Saudi Arabia, have set up breeding programmes to try to revive numbers.

While houbara hunting has been banned in India for decades, Pakistan continues to give special licences to Arab rulers and senior officials. This year Pakistan issued 33 permits allowing dignitaries to kill up to 100 birds each.

The list of licence holders is a who’s who of Gulf potentates, including the emirs of Kuwait and Qatar, the crown prince of Saudi Arabia and the president of the UAE.

The Arab kingdoms are home to huge numbers of Pakistani expatriate workers and the government is loth to jeopardise its relationship with such important regional allies.

“Arab dignitaries have been coming for hunting for decades and decades – it’s a longstanding tradition,” said Tasneem Aslam, from Pakistan’s ministry of foreign affairs. “Ten years ago there wasn’t so much public awareness about the issue but now we see more voices raising their concern.”

It’s not just environmental activists and the country’s boisterous media that increasingly focuses on the comings and goings of Arab dignitaries but also politicians determined to stop the sport.

Sindh, one of Pakistan’s four provinces where a large number of licences were issued for the hunting season, is attempting to challenge the foreign affairs ministry’s right to issue permits.

“We believe the constitution gives the right to give licences to the provinces,” said Sikandar Ali Mandhro, a Sindh provincial government minister leading the fight. “If we succeed we will immediately introduce a five- or 10-year ban because the bird numbers have become so low.”

Few outsiders have witnessed one of the bustard-hunting expeditions, but stories about the high-rolling Arab falconers are legendary in Pakistan.

Tons of equipment is flown in by private transport planes, including the falcons used to hunt the rare quarry. Luxuriously appointed camps are set up for the sheikh and his guests, who often stay for weeks.

Local communities value the money spent by their annual visitors, who have paid for improvements to roads and airstrips, as well as paying for the means to build mosques and schools.

An official from the Houbara Foundation Pakistan, which rescues birds captured for illegal shipment to the Gulf, said there was a desperate need for a proper national survey of houbara numbers in order to decide whether limited hunting should be allowed to continue.

“The real problem arises once a hunting camp is set up and other people come and take advantage,” said the official, who did not wish to be named. “We have informal information about locals shooting the birds.”

This article was written by Jon Boone for The Guardian.

No amount of money warrants such sickening killings of innocent birds just to have pleasure! Find productive ways to spend your wealth!

"Who'd a thunk it" as Leonard would have said!

Most people don't know that houbara bustards attack moving tents–with which they confuse princely Saudi dress. So, for the Saudi prince, it's kill or be killed.

Traditions are mostly shite! Especially ones like these. “Oh, we’ve always done that”. Stupidity! And the only thing that can cure a sagging libido is either youth, viagra or a well conditioned, unrepressed mind!