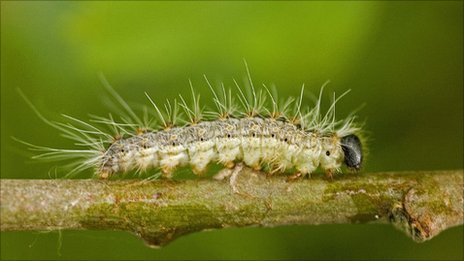 Wildlife in a Berkshire woodland was endangered by a “sledgehammer-to-crack-a-nut” approach to killing a toxic caterpillar, experts have said. Birds, bats and rare insects were affected by Forestry Commission aerial sprays to kill a moth larvae, Butterfly Conservation and Buglife claimed.

It was unclear if oak processionary caterpillar larvae were even present in the Pangbourne copses, they said.

The Forestry Commission said it had “strong reason to suspect” it was.

It was the first aerial spraying of its kind in the UK and was considered more effective than ground treatments as the caterpillars are attracted to leaves at the top of the trees, the Forestry Commission said.

The spraying of the pesticide Bacillus thuringiensis (Bt) took place in Herridge’s and Broom Copses, both within a Site of Special Scientific Interest (SSSI).

The caterpillar contains a toxin in its hairs that can cause itchy rashes, eye and throat irritations.

They feed on oak trees and produce silken nests on trunks and branches.

The commission, a government department, said it had destroyed a nest in each copse last year.

But Butterfly Conservation’s Mark Parsons said the aerial spraying, in May, was “a disproportionate response”.

He said any confirmed nests had been destroyed and that this was “a precautionary spray just in case any escaped detection last year”.

“It is a sledgehammer to crack a nut,” he said.

A commission spokesman said the discovery of the nests last year “gave us strong reason to suspect that there would have been others which were not detected”.

“The adult moths which would have emerged from these nests are highly likely to have established a breeding population in the woods, raising the prospect of the pest spreading into other areas,” he said.

Rare moths in the area of Herridge’s and Broom Copses

Mr Parsons said the strain of the Bt pesticide used “will kill a wide range of moth and butterfly larvae”, a number of which are scarce in the UK.

“Caterpillars form the food of many birds, which will be feeding their young at this time of year, and therefore there could be a knock-on effect on the birds locally,” he said.

Post-hibernation bats would have been affected as they also feed on spring moths.

The commission spokesman said: “We understand and share concerns that caterpillars of certain other moth and butterfly species present at the time of spraying might be affected.

“The scientific advice that we have received is that they will re-colonise the woods again from surrounding areas, and we have agreed a five-year programme to monitor this.”

Buglife pesticides officer Vanessa Amaral-Rogers said the commission “should have gone in and surveyed the site” beforehand, because the treatment had not been carried out before or tested in the UK.

She added: “Oak woodland is one of the most important habitats for invertebrates and Lepidoptera [butterfly] species. There is going to be a really bad impact in there.”

This article was written by Linda Serck for BBC News South