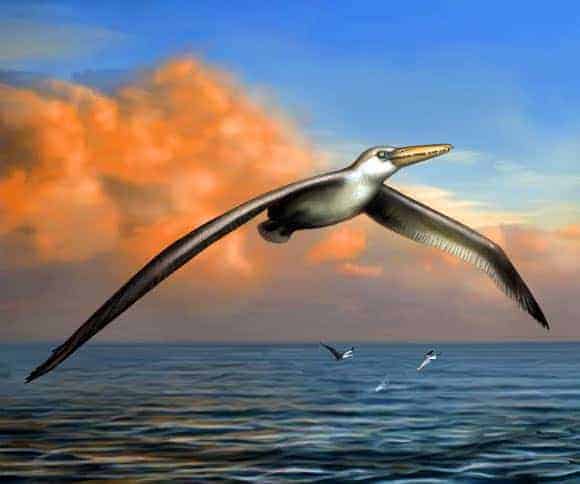 Pelagornis sandersi – a newly discovered extinct species of bird that lived in what is now North America about 28 million years ago – is the largest flying bird ever found, says Dr Daniel Ksepka, a paleontologist with Bruce Museum in Greenwich, Connecticut.

“Pelagornis sandersi could have traveled for extreme distances while crossing ocean waters in search of prey,” explained Dr Ksepka, who reported the discovery in the journal Proceedings of the National Academy of Sciences.

“Pelagornithids were like creatures out of a fantasy novel – there is simply nothing like them around today. These giant birds occurred all over the globe for tens of millions of years, but vanished during the Pliocene, just three million years ago. Paleontologists remain uncertain about the cause of their demise,” Dr Ksepka said.

At 6.4 m, the wingspan of this bird was about two times that of the Royal Albatross (Diomedea exulans), the largest living flying bird.

This wingspan places Pelagornis sandersi above some theoretical upper limits for powered flight in animals, but nonetheless it is clear from the skeleton the bird was a masterful flyer.

Dr Ksepka estimated the length of the feathers based on the relationship between bone lengths and feather lengths in living birds, and used computer models to infer that the bird was an efficient glider.

Now in the collections at the Charleston Museum, the fossilized remains of Pelagornis sandersi – its skull and substantial postcranial material – were recovered from the Chandler Bridge Formation in South Carolina by Museum volunteer James Malcom in 1983.