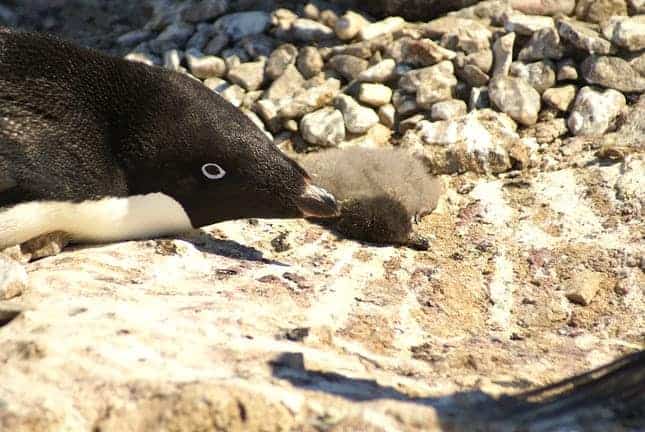 A colony of about 40,000 Adélie penguins in Antarctica has suffered a “catastrophic breeding event” – all but two chicks have died of starvation this year. It is the second time in just four years that such devastation – not previously seen in more than 50 years of observation – has been wrought on the population.

The finding has prompted urgent calls for the establishment of a marine protected area in East Antarctica, at next week’s meeting of 24 nations and the European Union at the Commission for the Conservation of Antarctic Marine Living Resources (CCAMLR) in Hobart.

In the colony of about 18,000 breeding penguin pairs on Petrels Island, French scientists discovered just two surviving chicks at the start of the year. Thousands of starved chicks and unhatched eggs were found across the island in the region called Adélie Land (“Terre Adélie”).

The colony had experienced a similar event in 2013, when no chicks survived. In a paper about that event, a group of researchers, led by Yan Ropert-Coudert from France’s National Centre for Scientific Research, said it had been caused by a record amount of summer sea ice and an “unprecedented rainy episode”.

The unusual extent of sea ice meant the penguins had to travel an extra 100km to forage for food. And the rainy weather left the chicks, which have poor waterproofing, wet and unable to keep warm.

This year’s event has also been attributed to an unusually large amount of sea ice. Overall, Antarctica has had a record low amount of summer sea ice, but the area around the colony has been an exception.

Ropert-Coudert said the region had been severely affected by the break-up of the Mertz glacier tongue in 2010, when a piece of ice almost the size of Luxembourg – about 80 km long and 40km wide – broke off. That event, which occurred about 250km from Petrels Island, had a big impact on ocean currents and ice formation in the region.

“The Mertz glacier impact on the region sets the scene in 2010 and when unusual meteorological events, driven by large climatic variations, hit in some years this leads to massive failures,” Ropert-Coudert told the Guardian. “In other words, there may still be years when the breeding will be OK, or even good for this colony, but the scene is set for massive impacts to hit on a more or less regular basis.”

The link between climate change and the sea-ice extent around Antarctica is not very clear. Sea ice has been increasing in recent years, which could be attributed to a rise in the amount of freshwater in the ocean around the continent caused by climate change. However, over the long term, climate change is expected to cause the sea ice to shrink dramatically.

“For the moment, sea ice is increasing and this is a problem for this species as it pushes the feeding place – the sea ice edge – farther away from their nesting place,” Ropert-Coudert said. “If it shrinks it would help but if it shrinks too much then the food chain they rely on may be impacted. Basically, as a creature of the sea ice they need an optimum sea-ice cover to thrive.”

Elsewhere, human pressures including climate change have already been having a severe impact on the numbers of Adélie penguins. On the Antarctic Peninsula, which has been badly affected by climate change, populations have been decreasing, and some researchers suggest they may become extinct there.

Ropert-Coudert said there were more anthropogenic threats on the horizon – fishing and possibly tourism – that the penguins needed protection from.

He has called for a marine protected area (MPA) to be established there.

“An MPA will not remedy these changes but it could prevent further impacts that direct anthropogenic pressures, such as tourism and proposed fisheries, could bring,” he said.

Next week, 24 countries and the European Union will meet at the CCAMLR in Hobart to discuss the potential creation of more MPAs around Antarctica.

At last year’s meeting, after years of failed negotiations, the members agreed to create the world’s largest MPA in the Ross Sea, and many expect the group to agree on East Antarctica next.

This has also been proposed by Australia and has been on the table at the CCAMLR for eight years.

The head of polar programs at WWF, Rod Downie, said: “Adélie penguins are one of the hardiest and most amazing animals on our planet. This devastating event contrasts with the image that many people might have of penguins. It’s more like ‘Tarantino does Happy Feet’, with dead penguin chicks strewn across a beach in Adélie Land.

“The risk of opening up this area to exploratory krill fisheries, which would compete with the Adélie penguins for food as they recover from two catastrophic breeding failures in four years, is unthinkable. So CCAMLR needs to act now by adopting a new Marine Protected Area for the waters off East Antarctica, to protect the home of the penguins.”

Ropert-Coudert and his colleagues are in the process of completing a scientific paper on the breeding failure and plan to submit it to a journal in the coming weeks.

This article was first published by The Guardian on 13 Oct 2017.