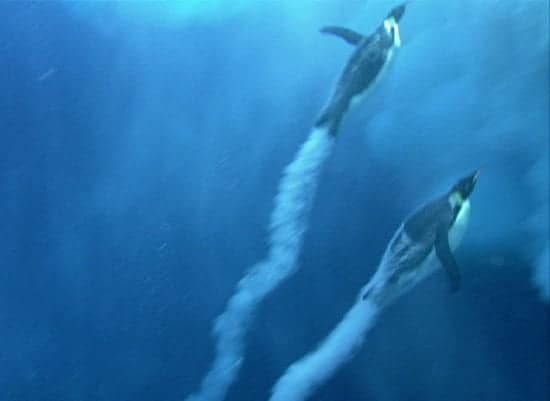 Penguins have been locked in an arms race or flippers race with leopard seals for eons, and like any aquatic superpower, they’ve been developing technology to keep them in the game. Their latest trick seems to have been stolen from 1960s Soviet rocket torpedoes, and allows the birds to fly underwater impossibly fast.

When penguins are being chased by something big and hungry, their go-to escape maneuver is to make for the surface and launch themselves up and out of the water and on to land (or ice). In some cases that means flying two or three meters up into the air. This is an impressive trick, and the BBC got a lot of cool footage of it as part of The Blue Planet series.

As you can see at the end of the vid below, as the penguins head for the surface at high speed, they leave trails of air bubbles behind them, sort of like they’ve got little butt-mounted rocket engines or something. As far as we know, this is not actually the case, and some British penguinologists (after spotting these bubble trails on Blue Planet) set about trying to figure out what was going on.

From what the researchers could tell from the BBC video footage, the bubble trails were originating from the birds’ feathers, as opposed to their beaks, so it’s not like they were simply exhaling on the way up. In fact, the bubbles formed clouds that stretched around the birds like a cape, from their necks all the way around their bodies and down past their tails and feet, leaving just their heads and flippers exposed. The way it seems to work is that these bubble capes are intentionally generated by the birds as they squeezed stored air out of their feathers on ascent, which is interesting, but what’s the point?

What we think the penguins are doing is using air to generate a buffer between their bodies and the water around them, drastically reducing drag and allowing the birds to launch out of the water at over 15 mph, more than three times as fast as the fastest swimming human and significantly faster than the average swim speed of a penguin. Essentially, the air buffer means that the majority of the body of the penguin isn’t in the water at all, but rather cruising inside an air bubble with just the head and fins protruding to allow for maneuvering. Since the drag between air and water is far less than the drag between penguin and water, for all practical purposes the penguins get to totally ignore the fact that they’re swimming and, while they still have enough air stored in their feathers to maintain the bubble, pretend like they’re flying instead, which is how they can put on those rocket-like bursts of speed.

Penguins may have been pulling this trick for a while, but so have we: back in the 1960s, the Soviets started to see what it would take to fire rockets underwater, and by the 1970s they were field testing a rocket-powered torpedo called the Shkval that encased itself in a gas bubble to allow for underwater speeds of over 230 miles per hour. This technique is called supercavitation, and it’s being explored as a way to reduce the drag of ships as well as to create super-fast submarines.

Meanwhile, the penguins might also be using their air cloaks as actual cloaks, since the air bubbles are hypothesized to significantly reduce their acoustic signature, making them harder for predators like killer whales to detect. Clever little birds, aren’t they?

This article was written by Evan Ackerman and published on DVice.com