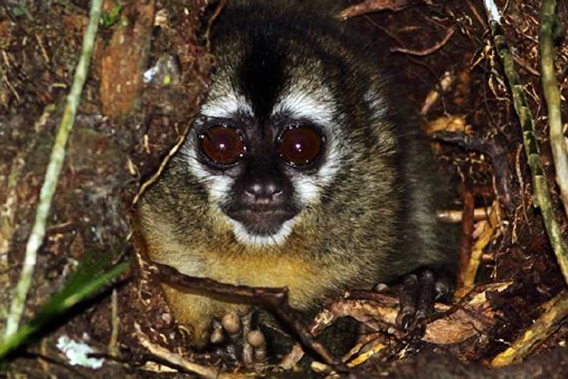 The Peruvian night monkey (Aotus miconax) is one of the world’s least known primates, having never been studied in the wild–until now. Found only in the cloud forests of northern Peru, a group of scientists with Neotropical Primate Conservation and the National University of Mayor San Marcos have spent 12 months following a single group of this enigmatic monkey species in a small forest patch. The results of their research, published in mongabay.com’s open access journal Tropical Conservation Science, shows that protecting forests, even small forest fragments, is vital to the species’ survival.

Currently, the IUCN Red Lists categorizes the Peruvian night monkey as Vulnerable, however the scientists write in their paper that the IUCN is “underestimating habitat loss and fragmentation” and the species more closely fits Endangered.

“It is only known from collection localities in the departments of Amazonas, Huánuco and San Martin. These same departments have some of the highest deforestation rates in Peru,” the researchers explains. “Deforestation in the area is fueled by immigration of people from the central and northern highlands looking for land for agriculture, cattle ranching and timber extraction.”

On the bright side, the researchers found that the species is capable of surviving in highly-fragmented forest. They followed a family group of six making-do in a single forest fragment only 1.4 hectares (3.4 acres) large.

“The study group has one of the smallest home ranges recorded for a night monkey group, probably the result of its isolated habitat,” the researchers write.

They recorded that the Peruvian night monkey group spent more time traveling and foraging than other species of night monkey, and theorize that this may be in response to their degraded habitat or in keeping warm in a colder environment. They also documented the group leaving the forest patch from time-to-time, probably necessary for survival.

“The continued presence and reproduction of [the Peruvian night monkey] in this heavily disturbed area suggests that the species is able to survive in isolated habitat close to human settlement; therefore the conservation of forest fragments is of importance,” the researchers conclude. “Special emphasis should be made in preserving connectivity to allow genetic flow between groups.” Forest corridors are needed to link up disparate groups, insuring that Peruvian night monkeys don’t begin suffering from in-breeding.

There are currently eleven night monkey species known in South America, all of them in the Aotus genus. They are the world’s only truly nocturnal monkeys.