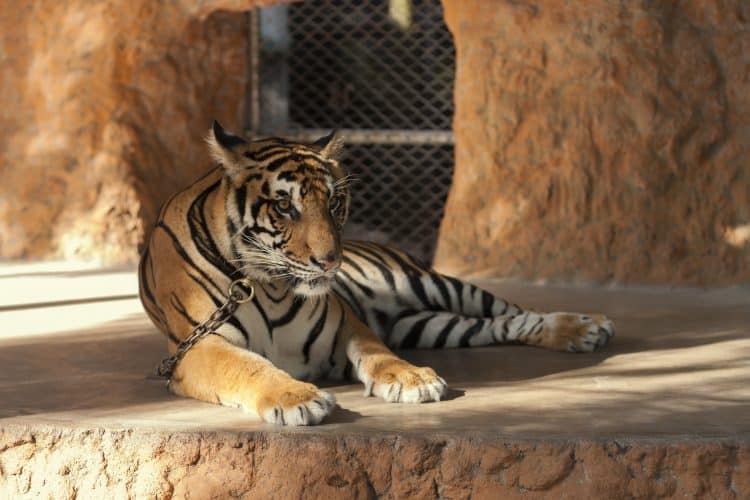 Phuket Zoo is notorious for their terrible treatment and neglect of animals. Just last month we shared a petition with the goal to shut them down after what happened with Dumbo the elephant.

Dumbo was seen being forced to perform unnatural tricks, dancing, and “raving” at Phuket Zoo despite appearing skeletal.

The baby elephant was even seen sucking his trunk for comfort, a sign of distress in baby elephants when they are in need of their mother. The organization Moving Animals led a movement to free the suffering baby elephant, but the story only became more tragic.

Dumbo apparently had a digestive tract infection and that’s why he was skeletal, but he also broke his back legs and the zoo didn’t notice for three days! He sadly died a few days later. Phuket Zoo is clearly a terrible place for animals.

Now Phuket Zoo is under fire again because photos have surfaced of a chained tiger at their facility being poked and tortured so that tourists can take photos with them. Visitors of the zoo also claimed that the tigers appeared to be drugged.

Zoo officials defended themselves by saying the tigers are familiar with the process of taking photos with people, are chained up for the safety of the tourists, and are not drugged.

Tigers should never have to be familiar with the process of being chained all day for people to take photos with them, and clearly they are not and it’s not natural for them since they have to be chained. They belong in the wild!

The tiger is simply there to be exploited as the zoo charges tourists who want photos 300 baht. This is one of the reasons its important not to support these types of facilities as a tourist. When traveling, do not pay to take photos with wild animals or see them up close.

Elisa Allen of PETA says: “These hellholes will stay in business as long as people support them with their wallets, which is why PETA encourages everyone, everywhere, to steer clear of any establishment that holds wild animals captive for so-called entertainment.”

Unfortunately, the investigation launched has resulted that there was no ‘animal cruelty’ at Phuket Zoo. According to Phuket News: “Officers from the Department of National Park, Wildlife and Plant Conversation (DNP) inspected the zoo, given advice about how to treat animals, and cautioned the owner to do things correctly and make a good image of Phuket for tourists.” It’s all about keeping up good appearances for tourists so that they can continue to exploit the animals.

However, we can still demand change! To demand that Phuket Zoo send the chained tiger to a sanctuary, sign this petition.

This article was first published by OneGreenPlanet on 8 July 2019.

Humans have tragically mastered the “art” of cruel and stupid.

And they to, suffer from their own inadequacies.