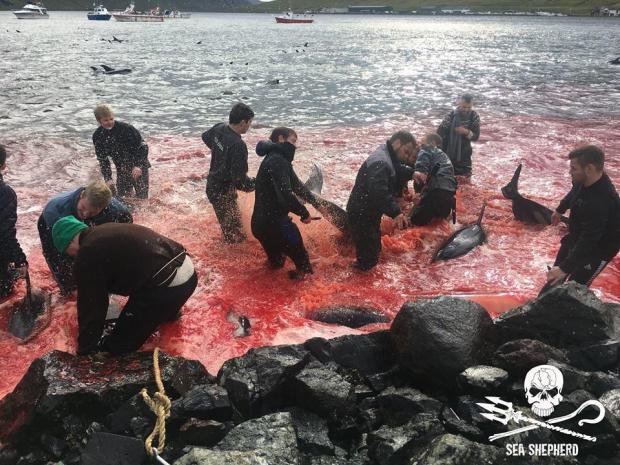 Animal activists from around the world are mourning the death of hundreds of whales and dolphins after the Faroe Islands’ horrific whale hunting “tradition” continued last month.

Many had hoped for this year’s whaling season to be cancelled due to the pandemic, but sadly, it was given the go ahead by fishing ministry Jacob Vestergaard on July 7th.

Sea Shepherd has long condemned this “barbarous practice,” while demanding an end to the Faroe Islands’ outdated whale hunting season.

Every year, up to 1,000 migrating pilot whales and other dolphins are hunted and brutally killed in the Danish protectorate of the Faroe Islands.

Sea Shepherd has led opposition to the grindadráp since the 1980s, saving the lives of hundreds of pilot whales and bringing global attention to the ongoing slaughters.

A total of 28 Sea Shepherd volunteers have been arrested for interfering against the grindadráp, many of whom were subsequently deported for the “crime” of defending pilot whales.

Although Sea Shepherd was able to successfully disrupt the whale hunting season in 2014, the organization was hit with legislation that allowed Danish military to keep the NGO outside Faroese waters.

ORCA, another animal rights organization based out of California, posted on twitter, “To the beautiful family of pilot whales that were brutally murdered in the Danish #FaroeIslands, we are so deeply sorry….We will keep fighting to end this insane blood sport. RIP Beautiful family.” The organization also urged people to “Please Boycott the Faroe Islands!”

Please sign this petition to help put an end to this sick and horrifying tradition once and for all!


What you can do