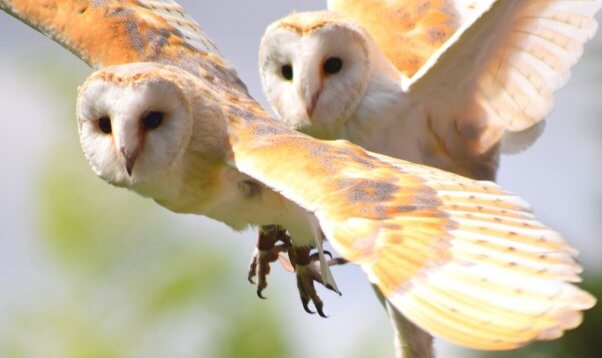 It looks like something out of a horror movie. Shreesh Mysore, an experimenter at Johns Hopkins University, is holding barn owls captive in his basement laboratory, experimenting on them, and then killing them.

Mysore and his team implant electrodes in the birds’ brains, lock them in restraining devices, and force them to see or hear various stimuli to monitor their reactions.

When they’re done with the birds, they kill them.

Here are nine shocking reasons why PETA is working to get this laboratory shut down:

1. Mysore plans to use and kill up to 60 more owls in his latest set of experiments. This includes using six of them for practice surgeries by inexperienced staff. Mysore keeps some owls alive, forcing them to breed and produce more victims for his laboratory.

2. Experimenters restrain owls in tiny tubes for up to 16 hours straight and clamp their eyes open. (This is similar to a scene in the sci-fi horror movie A Clockwork Orange.) As the animals are bombarded with unfamiliar sights and sounds, they become desperate to escape, writhing and struggling against their restraints. All this suffering is for misguided experiments that tell us nothing about attention disorders in humans, despite Mysore’s ludicrous claims.

3. Mysore removes part of the animals’ skulls and attaches a “chamber” that opens to provide easy access to their brains. He implants electrodes in their brains and cements a stainless steel bolt to the base of their skulls, which he uses to attach to a device that prevents them from moving their heads.

4. Moving electrodes to different locations in the brains of live owls causes severe tissue damage. Despite this, most of the owls are kept alive until all the data are collected.

5. Mysore left out crucial information about the owls’ treatment in his latest grant application to the National Institutes of Health. He neglected to say how long the owls will be restrained, how many surgeries will be performed on them, how they will be cared for afterward, where he acquired them, and whether he had the proper permits. Despite these glaring omissions, his funding was approved.

6. Barn owls are nocturnal animals whose vision, hearing, and behavior differ significantly from those of humans. Their eyes are adapted to low-light conditions, and their vision is entirely unlike ours. Their hearing is orders of magnitude more acute than ours. Bombarding them with completely unnatural sights and sounds is especially cruel and tells us nothing about human attention disorders

7. Decades of experiments on barn owls have contributed nothing to treatments for humans. Clinical studies of humans have already told us much more about the way humans prioritize and modulate attention in the brain.

8. Barn owls are sentient, remarkably intelligent birds who play an important role in biodiversity. Their populations are increasingly threatened by urban and suburban development, loss of grasslands and suitable nesting sites, pesticides, rodenticides, and motor vehicles. They need to be protected, not experimented on.

9. Barn owls are sensitive, and they suffer terribly in Mysore’s sparse basement laboratory. For those lucky enough to spot one, these industrious birds can be found all over the United States. They can make their homes in grasslands, forests, and suburban and agricultural areas.

They roost in tree cavities, crevices, caves, and even buildings such as barns (hence their name), and at night they hunt over a large territory. But those held captive at Johns Hopkins are robbed of every semblance of the life that nature intended for them. They know only deprivation, fear, and pain.

Tell Johns Hopkins University to shut down this laboratory and end its abusive and pointless experiments on barn owls.

Shut the Owl Lab Down Now