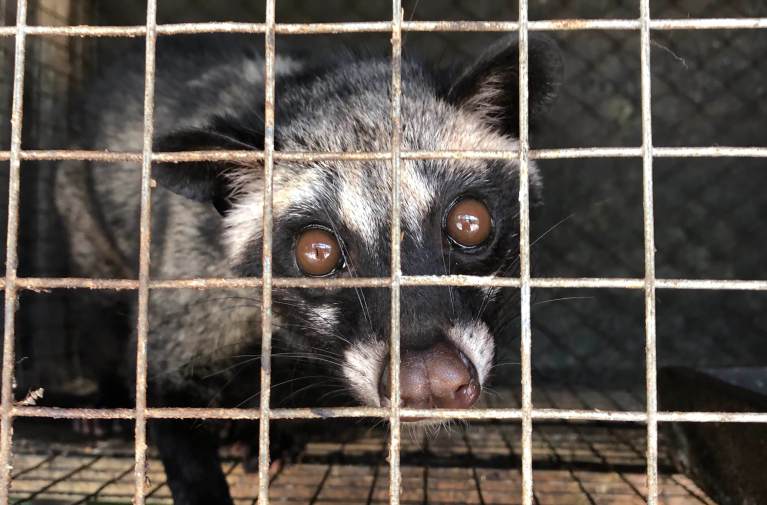 People around the world are paying exorbitant prices — and perhaps risking their lives — for the world’s most expensive and cruel drink: cat poop coffee. While it may sound like a silly gimmick, the kopi luwak industry is a very serious business, with a single pound of coffee selling for up to $600.

And as a recent investigation from Lady Freethinker (LFT) reveals, the novelty has given rise to a profit-driven tourist industry that puts humans in close contact with civet cats — the same species notoriously prevalent at China’s wet markets and responsible for transmitting the SARS virus to humans. Known to carry a host of zoonotic diseases, civet cats pulled from the wild to entertain tourists could very well be breeding the next pandemic.

Also called kopi luwak, the coffee is made by harvesting coffee cherries digested and excreted by Asian palm civets, which are actually not cats but more closely related to mongooses. These little critters naturally ferment swallowed coffee beans with protease enzymes, and some people claim the final product is smoother and less acidic than its non-digested counterpart.

LFT’s investigator visited multiple kopi luwak tourist traps and discovered the naturally solitary, nocturnal animals trapped in small, barren-wire cages without access to adequate food and water. Loud, gawking tourists got up close and personal with the animals, keeping them awake during the day when they’d naturally be sleeping. These “tours” are directly bookable on TripAdvisor.

Behind the scenes — in areas not freely open to the public — conditions only get worse. In one backyard farm, LFT’s investigator found caged civets, roosters, porcupines, and even dogs forced to live in cramped cages without room to freely move about. The dogs and roosters were likely headed to slaughter or a religious sacrifice.

These clear, dismal acts of animal cruelty don’t just hurt civets — they risk human lives, too. In 2003, Severe Acute Respiratory Syndrome — also known as SARS — infected over 8,000 people and killed more than 800 before the war on the virus ended. And scientists determined that the same animals fawned over by unsuspecting tourists are directly linked to the world’s first pandemic of the twenty-first century, when SARS most likely jumped from bat to civet to human.

Civets are also known to carry distemper, rabies, avian influenza H5N1 (bird flu), parvovirosis, Bartonella henselae (cat-scratch disease), and other diseases. All of this is hard to stomach, and so is the diet civets are forced to eat and the implications that might have for virus shedding. Instead of a mixture of fruits, rats, mice, insects, eggs, snakes, frogs, lizards, and birds — the food sources they’d naturally choose in the wild — kopi luwak farmers feed captive civets coffee cherries, coffee cherries, and more coffee cherries.

Consuming that much caffeine evokes anxiety and boredom, which causes civets to relentlessly pace back and forth in their small cages, chew their tails down to the bone, and act aggressively toward one another.

The combination of added stress and open wounds from anxiety-induced chewing makes these farms ideal spots for the spread of viruses.

Scientific evidence suggests stressed animals are more likely to show and “shed” viruses, leading to an increased risk of “spillover,” or a virus making the jump from animals to humans.“You can think of it like if people are stressed and have the cold sore virus,” said Professor of Wildlife Epidemiology at the Zoological Society of London Andrew Cunningham. “They will get a cold sore. That is the virus being ‘expressed.’ This can happen in [animals] too.”

This isn’t a sustainable industry, kopi luwak cannot be guaranteed cruelty-free, and the danger of disease is well-documented. People deserve to know the truth behind this torturous industry, so they can decide for themselves if caging innocent animals and putting the world at risk for another pandemic is worth an overpriced cup of Joe.

Lady Freethinker is urging travel giant TripAdvisor to end all sales of kopi luwak tours on its platform, which should encourage others to do the same. Sign the petition here and help stop this needless and dangerous cruelty.

Animals are here with us, not for us